Europe's oldest city, Cadiz is a treasure trove of historic sites and streets, seaside promenades and a vibrant Andalusian atmosphere. On this half day experience, you'll discover its past with a guided city tour and admire highlights such as the cathedral, La Caleta beach and the Central Market.

We'll begin the day trip with a panoramic drive around Cadiz. You'll be able to get a real sense of this city, which is almost surrounded by the Atlantic Ocean. We'll then stroll through squares, both grandiose and quaint, marvel at plazas and discover Europe's largest Roman theatre. At Plaza de España, we'll see the House of the Four Towers, the old Customs Office and the monument to the 1812 Constitution.

You'll also be able to admire the golden-domed cathedral as well as the recently renovated Central Market, where can pop in to explore its delights. Before we return, you'll have some free time to wander around the city at your own pace.

Read more
COVID-19 information
The following health and safety measures are in place, so you can relax and enjoy your experience.
What's included
Provider
TUI ESPAÑA TURISMO S.L.U.
Booking fee
Good news! No extra fees are applied to this booking.
Cancellation policy
Receive a 100% refund if you cancel up to 1 day before the experience begins. 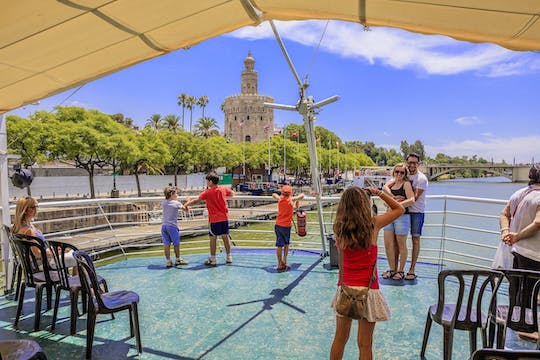 Gliding through the historic centre of Seville, this hour-long river boat cruise takes you on a real sightseeing voyage. You'll get to see the sights while sitting comfortably on board, and watch the city unfold under the glow of the sun or lit up by night.You'll set off on an hour-long cruise down Guadalquivir River to explore Seville from a whole new perspective. Sit back and enjoy the ride as you gently glide under historic bridges and past some of the city's most impressive monuments and buildings on the banks of the river. Keep an eye open for avant-garde architecture, the pavilions from the international exhibition and Triana neighbourhood amongst many other sights. The best part is that there are departures every half an hour, so pick a time that best suits your schedule. Gibraltar – Britain's towering outpost in the Med. This thrilling cable car ride to the top of the 421m summit sees you take in the breathtaking panoramic views of two continents – Europe and Africa. Up on the peak a personal handheld device provides commentary whilst you might also get the chance to spot the mischievous Barbary apes that call the top of the rock home. Andalusian horses are famed the world over for their agility and skill and there's no better way to witness it than this performance by the Royal Andalusian Equestrian School. How Andalusian Horses Dance is a pulsating spectacle showcasing impressive dressage and traditional horsemanship. From your front row seats you'll admire the skills of these magnificent creatures in this unique equestrian ballet. What's more, you'll even get to roam the palatial gardens and grounds before the show. Seeing dolphins in their natural habitat is one of life's special experiences. See these fascinating and friendly creatures on this cruise down Portugal's sunny, south coast. Welcomed aboard by the crew, you'll set sail from Olhao harbour. Passing the lagoons of Ria Formosa Natural Park, you'll then head out into the Atlantic. And your knowledgeable captains know just where to head. Both bottlenose and common dolphins call this place home, and they just love to show off. A captivating and family-friendly experience. In just 45 minutes you can sail to a whole other continent, and this day trip to Morocco ticks off all your bucket-list experiences. You'll land in Ceuta where it's off to the cities of Tetouan and Tangier for some sightseeing, free time for shopping and a Moroccan lunch between.It's just a hop, skip and a jump to Morocco from the Costa de la Luz, and this tour really gets going once you've crossed over the border from Ceuta. Stop for a photo on your journey to Tetouan, then find yourself in the beating heart of the city's UNESCO-listed medina.A guided tour will take you landmarks such as Hassan II Square – site of the Royal Palace – the Jewish quarter, Berber souk, medina and more. Lunch in a traditional Moroccan restaurant will be enlivened with folk music, then you'll hit the road to Tangier. Round off the day with more sightseeing around the modern and diplomatic quarters before beginning your return journey to Spain. Set your senses ablaze with this private wine-tasting experience exclusively for you and your party. Discover the history and tradition of Andalusian wine-making with a tour of Bodega Viña La Constancia. Then, embark on a sensory voyage as you're blindfolded to taste five of their finest wines with some light tapas and a story to set the scene. It's an odyssey for the senses.