The tour starts in downtown Lima, where you take a scenic tour of the built-up area, a World Heritage-listed by UNESCO. You will go to Plaza Mayor to see the Presidential Palace and the Lima Cathedral. Also visit San Martín square, the scene of the most important social and political events of the 20th century in Lima. In the center of the square, you can see the monument to the liberator José de San Martín, manager of the independence of Peru. Upon your return to Miraflores, make a short stop at the Love Park, inaugurated on February 14, 1993.

You will coordinate your pick-up time and location directly with the local operator. Pick-up is available only from hotels located in Miraflores, San Isidro, and the historic center of Lima. You must be ready and waiting in the hotel lobby 15 minutes prior to your scheduled pick-up time. PLEASE NOTE: The tour does not include the pick-up from private residences; if you stay in them, please contact the local operator days prior to the start of the tour, in order to coordinate a meeting point (You will find their contact information in the voucher after the booking)

What to remember
Read more
When
Read more
Provider
Lima Tours
Booking fee
Good news! No extra fees are applied to this booking.
Cancellation policy
Receive a 100% refund if you cancel up to 24 hours before the activity begins. 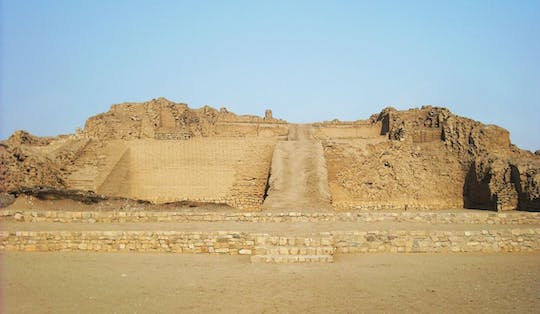 Spend an unforgettable evening at Dama Juana and learn about the Peruvian culture in a different way. Enjoy a typical dinner and see one of the best folkloric show in Lima.

Enjoy a night tour of San Isidro, Miraflores, and Barranco districts in Lima. See a beautiful view of the Pacific Ocean, the nightlife, and the urbanism of the city.

Visit the Indian market of Lima and discover many stalls with Peruvian handicrafts from all regions.