Spend a full-day exploring the beauty of Tivoli with this private 8-hour tour from Rome. Admire Villa d’Este and Villa Adriana with their beautiful gardens. You’ll be also able to spend some time visiting the city of Tivoli, where you can have lunch (not included).

Your private driver will pick you up from your accommodation in Rome in a luxury minivan. In around 45 minutes you’ll reach Tivoli, where you’ll tour Villa Adriana first, the former holiday home of Emperor Hadrian. It was built in the 2nd century AD. Hadrian’s Villa was a complex of over 30 buildings, covering an area of at least 1 square kilometre (c. 250 acres) of which much is still not excavated. The villa was the greatest Roman example of an Alexandrian garden, recreating a sacred landscape. The complex included palaces, several baths, theatre, temples, libraries, staterooms, and quarters for courtiers, praetorians, and slaves.

After your tour of Villa Adriana, you'll have time for lunch and for a nice walk in the little and ancient town of Tivoli. The city offers a wide view over the Roman countryside.

In the afternoon you’ll see Villa d’Este, built in the heart of the Renaissance around 1550, for the will of the Cardinal Ippolito II d’Este, Tivoli’s governor. Walk around the Villa with your guide (if booked), taking in the gardens and posing for photos in front of Bernini-designed fountains while learning about the Cardinal and his lavish life in the villa. Villa d’Este’s fame, however, is due more to its gardens than to the building itself. This most famous Italian-style garden, which has been imitated, reverberates with the sound of so many fountains that inspired the Romantic composer Franz Liszt to write a piano suite called ‘Fountains of the Villa d’Este.’

After Villa D’Este visit, you'll return to your hotel or accommodation in Rome.

Please provide your address at the time of booking for arranging the pick-up service.

Read more
Provider
ItalyBestExcursions
Booking fee
Good news! No extra fees are applied to this booking.
Cancellation policy
Unfortunately, we can't offer you a refund nor can we change or cancel your booking for this particular product, due to our partner's policy. 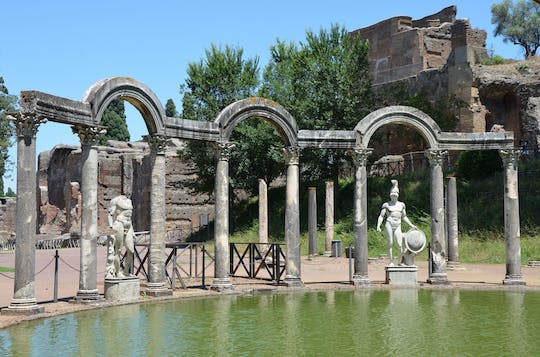