Your tour through Colonial Williamsburg begins at the visitor center just north of the town center. As you walk south, you’ll learn not only about the earliest residents of Williamsburg but also the Native Americans who called this place home when the first European settlers arrived. The first major landmark you’ll arrive at will be the Peyton Randolph House, a gorgeous home dating back to 1715.

Next, you’ll arrive at the Fife and Drum Building, where you’ll learn about the importance these simple instruments had during battles. Continuing onwards, you’ll hear about the origins of the Colonial Williamsburg museum project, including how America’s first billionaire, John D. Rockefeller, bankrolled the whole thing! After that, you’ll see the Public Gaol, a grim prison that once held all manner of unsavory sorts.

Up next is Bassett Hall, the lavish estate where Rockefeller lived while overseeing the restoration of Colonial Williamsburg. Then it’s on to the old Capitol Building, where Virginia once declared independence from Britain, four days before the Declaration of Independence was signed. You’ll find the Raleigh Tavern next. During the 1700s, this tavern’s unassuming facade hid secret revolutionary meetings within.

Next, you’ll come to the Williamsburg Magazine, an old munitions storehouse. As you make your way to the Play House Stage, a recreation of one of the country’s oldest theatres, you’ll hear a few spooky stories about ghost sightings that have taken place throughout Williamsburg. Then, you’ll reach the Governor’s Palace. You’ll see two of the town’s most historic structures: the George Wythe House and the Bruton Parish Episcopal Church.

Finally, you’ll make your way to the historic campus of the William & Mary School, the nation’s second-oldest university. Here, you’ll find one of Williamsburg’s oldest and most impressive buildings. The tour concludes here.

What to remember
Read more
When
Read more
Provider
ACTION TOUR GUIDE LIMITED
Booking fee
Good news! No extra fees are applied to this booking.
Cancellation policy
Receive a 100% refund if you cancel up to 24 hours before the experience begins. 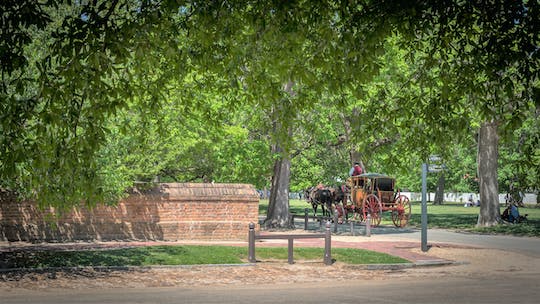 Visit the most romantic places in Williamsburg with this 2-hour tour with a professional local guide. An exclusive tour for all the romantics of the world! The best of Williamsburg private tour

Get the most of Williamsburg with this 2-hour private tour of the most charming places in the city!