Herculaneum Tour from the Amalfi Coast

Buried under a torrent of mud and lava after Mt Vesuvius erupted in 79AD, the ancient Roman town of Herculaneum is a sight to behold. You'll take it all on in this half-day tour from Amalfi. In about two hours, you'll see the most important sites, including the public baths and the lavishly decorated villas of well-to-do families.

Everything is so well-preserved in Herculaneum that you can walk down the streets pretty much exactly as the Romans would have done over 2,000 years ago. Your guide will show the original timbers in buildings and clay pots stored as they would have been at the time of the eruption.

And that's not all – the public baths still feature their frescoes and mosaics, and there's the shop and gymnasium to peek into, too. Not to be missed are the skeletons – which were preserved by ash – of victims who sought shelter in boat houses It promises to be a fascinating half-day trip.

You can't take bags larger than 30x30x15cm into Herculaneum

. Bring your passport or official eu identification. Admissions not included. Please note that all times are approximate and subject to change
Read more
Provider
TUI HOLDING SPAIN, S.L.
Booking fee
Good news! No extra fees are applied to this booking.
Cancellation policy
Receive a 100% refund if you cancel up to 2 days before the activity begins. 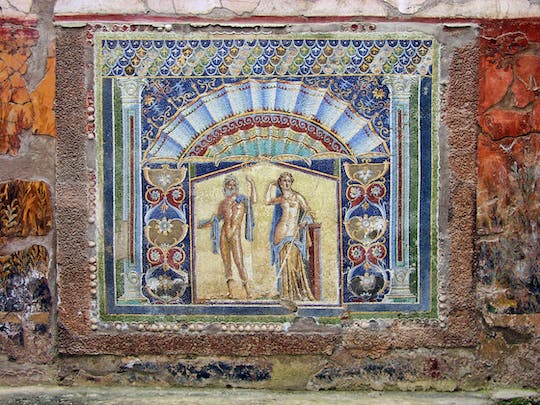 Herculaneum Tour from the Amalfi Coast Pompeii and Mt Vesuvius are the Beauty and the Beast of the Amalfi Coast. First, your guide will lead you through the streets of Pompeii. Buried under volcanic ash by Vesuvius's eruption of 79 AD, it has been clawed back from Mother Nature and is now a UNESCO-listed site. Discover richly decorated Roman villas and public spaces such as the Forum, Amphitheatre and gladiator barracks. In the afternoon, you'll visit Mt Vesuvius – the architect of Pompeii's destruction. Going by road to the 1,000m mark, a guide will then escort you to the summit to take in the views over the Bay of Naples. On your return, there's a visit to a coral factory. 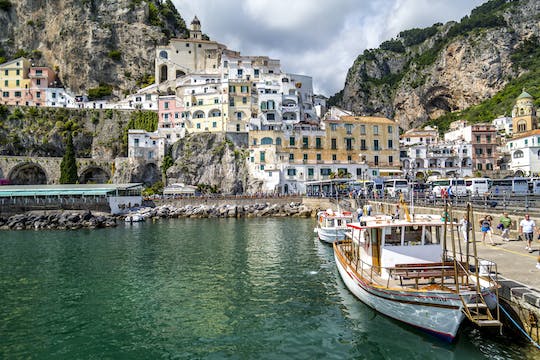 An afternoon that's a feast for the senses. Your first port of call is at the Emerald Grotto. Discovered only in 1932 despite this being one of the most explored coastlines in history, its glittering green waters add to its mystique. Observe it from the boat or try the optional visit. Your skipper will then press on to Positano. There are two ways to reach this gorgeous town – by road and by boat. You'll arrive in by far the best. Shaped like V, Positano straddles sloping cliffs. Drop into the prominently located church of St Mary of the Assumption. If the Amalfi Coast is the business, then Capri is showbusiness. This magnet for celebs since the days of Roman emperors is a must-visit. Nowadays it's the likes of Naomi Campbell, George Clooney and Beyoncé who take their holidays here. Zigzag up to Anacapri and wander along cobbled alleys of whitewashed houses for views over the Amalfi coast. One of the highlights is the Phoenician Steps that lead all the way down to Capri port. In the afternoon, head back down to Capri and you can join the jet-setters in the bars, cafés and label-laden boutiques, or check out its half-dozen dinky baroque churches. 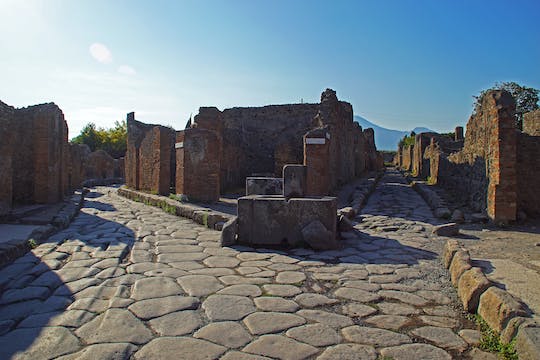 Frozen in time by tragedy, Pompeii and Herculaneum are a must-visit when in the Amalfi Coast. First up, your guide will lead you through the streets of Pompeii and show you the richly decorated villas of the Roman upper classes as well as public spaces such as the Forum. Stroll along its cobbled streets as you gaze at the remains of temples and villas. In the afternoon, head to the archaeological site of Herculaneum. You'll see the boathouses that are the final resting place of many refugees as well as marble floors, mosaics and frescoes. 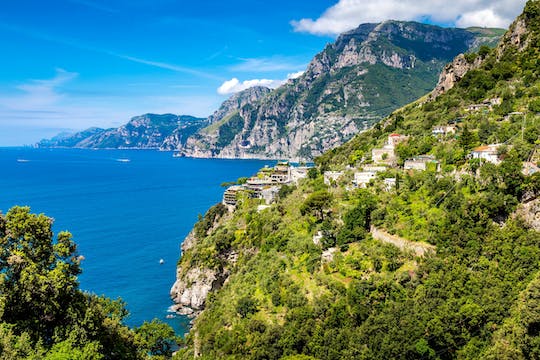 Sorrento is brimming with centuries-old palazzos, piazzas and grandeur, which added to its cliff-side location, make it a photographer's dream. Your guide will take you on a walk covering all its highlights. Take in the splendour of its palaces and churches. You'll have free time for lunch, then join up with your guide to visit a woodwork shop – a typical Sorrentine craft – setting off along Amalfi Drive. Weave through the picturesque villages of Conca dei Marini, Furore and Praiano, with views and history aplenty. Then conclude it all at the panoramic viewpoint at Positano Belvedere.