It's a guided excursion with a vehicle, that goes across the right or south hemisphere of the Delta de l'Ebre to see firsthand its most interesting points. The Ullals de Baltassar (the first stop); a natural treasure little known but important, is a point of emerging underground fresh water that comes from the Montsià mountains and the Ports Natural Park mountains. Due to the purity of its water, these aquifers have given life around a unique ecosystem full of biodiversity.

You will also visit the two biggest and most important lagoons, l'Encanyissada and la Tancada, they were together in the past but now they are apart due to the drying of the land for the rice cultivation. They are the home to many birds and fish that live permanently and intermittently there, and can be seen from different viewpoints which outline the wetlands. Highlighting on this Delta plain you'll see the bell tower of Poblenou del Delta, a small quiet town that stands out for its white houses. Although it is considered a modern village because it was built in the mid-twentieth century, it has an interesting history that keeps alive the essence of the territory. If you observe well, you can discover, among the rice fields and farm houses a cultural jewel with which this territory was defended centuries ago, the Tower of Sant Juan. A small and nostalgic structure in ruins that is located in the northern part of the Alfacs bay, a few meters from the land with which caresses only when the sea leaves visible a mysterious row of stones.

Between changing rice fields, you'll arrive to one of the most photographed wild beaches of Catalonia; the Trabucador. A gorgeous sandy line that makes its way 6 km between the Mediterranean Sea and the Alfacs Bay until the Punta de la Banya Bay. The contrast of the two waters each one with its own rhythm, the Montsià mountains and the silence and calm that you can breathe from this landscape make this place a magical and unforgettable site for visitors and inhabitants alike.

In front of the river Ebre promenade, near the bridge Lo Passador

When
Read more
Provider
RIU A L'EBRE
Booking fee
Good news! No extra fees are applied to this booking.
Cancellation policy
Receive a 65% refund if you cancel up to 2 days before the experience begins. 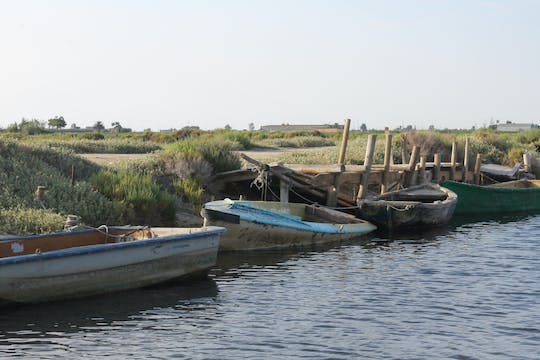 Book online a guided tour to discover the spectacular beauty of the Ebro Delta Natural Park, the largest protected wetland in Catalonia. More than 800 different species of flora are waiting for you! 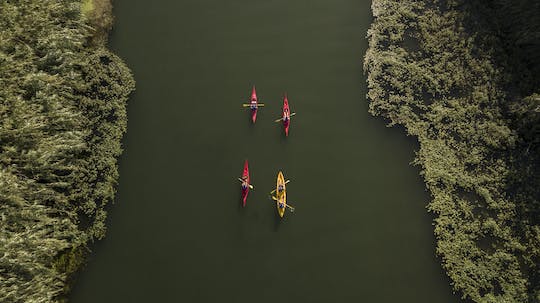 Book now a guided tour to explore Isla de Gracia and discover one of the monumental trees in Catalonia known as "Ballad ballad".