Start with a pick-up from the hotel at 8.00 am and drive to the UNESCO World Heritage site, the Temple of the Sacred Tooth Relic that houses the relic of the tooth of the Buddha. You will spend about an hour at the temple before going to the British Garrison cemetery established in 1817 and closed in 1873 due to the ban of burials in municipal limits. Then, get in a Tuk Tuk and go around Kandy Lake to go to Bahirawakanda, a village near Kandy city, there you will see Bahiriawakanda Temple, situated on a hill just 2 km away from the Temple of the Tooth Relic. The temple has one of the biggest Buddha statues in Sri Lanka and the hill provides a panoramic view of Kandy city, making it a must-see for everyone visiting Sri Lanka.

After that, continue with a city tour of Kandy, a charming hill country and the second-largest city of Sri Lanka. It is the country's cultural and religious center and a part of the cultural triangle of Sri Lanka that is also considered a UNESCO World Heritage Site. To experience the life of a local, you will visit a local market that sells vegetables, fruits, dry rations, and spices. Then, see Kandy from its viewpoint or known as Arthur's seat, the author and tea planter living in a bungalow near this place. It's located past the royal palace park and 550 meters above sea level which provides a panoramic view across the Kandy Lake and Temple of the Tooth Relic. To end the tour, you will have lunch with a panoramic view of Kandy.

Meeting point:
Pick-up from your hotels in Kandy. You will indicate your pickup location at checkout and confirm your pickup time and location directly with the local operator
What to remember
Read more
Provider
Aitken Spence Travels
Booking fee
Good news! No extra fees are applied to this booking.
Cancellation policy
Receive a 100% refund if you cancel up to 1 day before the experience begins. 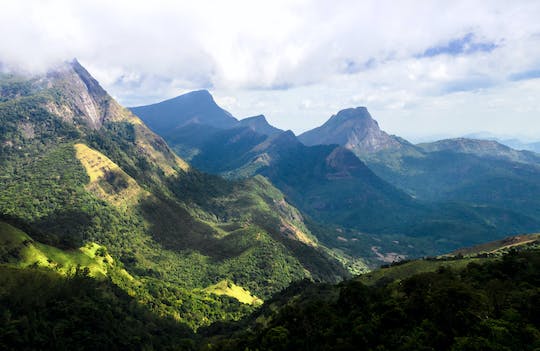 Learn more about the Knuckles Mountains ecosystem which hosts pockets of the cloud forest, dry evergreen forest, and wet and dry Patna grassland.

Enjoy a full-day trekking excursion and admire the stunning natural beauty of the Knuckles mountain range. Enjoy the peace, quiet, and beauty that the hills of Hanthana offer and marvel at the spectacular views from one of the 7 peaks.

Enjoy the peace, quiet, and beauty that the hills of Hanthana offer and marvel at the spectacular views from one of the 7 peaks.

Enjoy a private day tour of Kandy, admire the best spots of the city and learn more about local culture and traditions.