Discover the beautiful city of Lindau known as the “Bavarian Riviera” during a private walking tour.

Stroll through the city on the eastern side of Lake Constance and enjoy its Alpine views, lakefront cafes, and its old town stranded on a small island. See the medieval and half-timbered buildings that bear witness to a turbulent history, unspoiled nature, and relaxed, laid-back beach atmosphere.

Start your tour in front of the Mangturm on the promenade and learn more about one of the most famous still standing watchtowers of the old medieval fortification belt. In the background, admire the entrance to the port, with its two main landmarks: on one side the new Lighthouse and on the other side a huge 6 meter high and 50 tons sitting Lion, guarding the entrance. Pass by the Thieves Tower and listen to its fascinating story. See the “Fools Fountain”, and find out more about its interesting figures, each wearing masks worn by Lindau's guild of carnival fools.

Meeting point:
Meet your guide in front of the Mangturm on the promenade. Your guide will hold a sign board together with the name of the guests on it.
What to remember
Read more
Provider
Global Guide Services GmbH
Booking fee
Good news! No extra fees are applied to this booking.
Cancellation policy
Receive a 100% refund if you cancel up to 5 days before the experience begins. 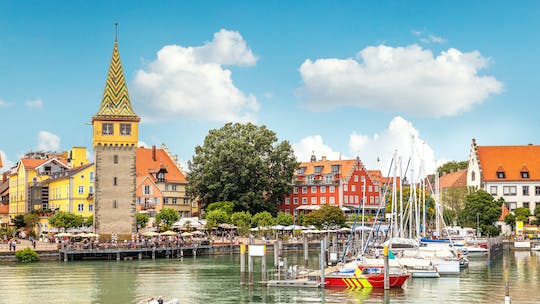