This tour will shows you how strongly Jewish culture, its signs and symbols have influenced the architecture and culture of Lviv. You will trace the important facts of the Jewish community from the 14th century until our days.

Meet your guide in front of the Lviv Opera and Ballet Theater and start a comprehensive walking tour of the places related to the Jewish heritage in Lviv. Find out, when Jews first appeared in this region and how Lviv became the new hospitable house for the European Jews of the 14th century. Discover that since the end of the 18th century and until 1939 the Jews were the third part of Lviv population.

Stroll through atmospheric streets and yards of old Jewish Quarter and learn its order, customs, misfortunes and achievements. Moreover, learn about its famous inhabitants of different times, including Sholem Aleichem, who have made great contribution to the cultural development of Lviv.

Walk through the Staroevreiskaya Street and see the ruins of the Golden Roza Synagogue. One of the most beautiful and dramatic city legends is related to this place. Your guide will explain you why there were two different Jewish communities in Lviv and how they were officially united in the 18th century. Learn how many synagogues were built in Lviv and how many of the have sur-vived until our times. See compactly located significant buildings, places, monuments, modern ob-jects connected to the Lviv Jewish heritage, feel the Jewish flavor of the city and fall in love with this side of Lviv soul.

The guide will be holding a “Green Tour Ukraine” sign in front of the Lviv Opera and Ballet Theater.

What to remember
Read more
When
Read more
Provider
Green Tour Ukraine
Booking fee
Good news! No extra fees are applied to this booking.
Cancellation policy
Receive a 100% refund if you cancel up to 1 day before the activity begins. Tour to the three Castles around Lviv Feel the incomparable taste of Lviv coffee, buy sweet souvenirs at the “Lviv Chocolate Factory” and discover the coffee traditions in Lviv. 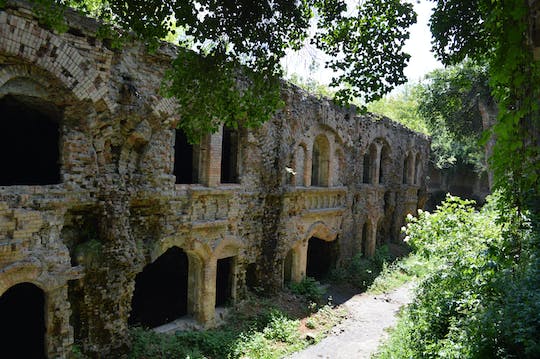 Day-trip to Lutsk, Tarakaniv Fort and the Love Tunnel from Lviv

Discover Lubart's Castle, built in the 13th and 14th centuries, marvel at the fairytale Tunnel of Love in Klevan' with an expert friendly guide. The winding labyrinths beneath the Lviv Old Town hide plenty of intriguing secrets. If you are brave, you will enjoy this exciting journey. A fascinating 2,5-hour private walking tour will introduce you to the main sights of the UNESCO-listed Lviv old Town. Visit the magnificent city of Zhovkva and Krekhiv Monastery on a half-day private combo tour with a local guide.