Private tour to St. Basil's Cathedral and the Red Square in Moscow

Saint Basil’s Cathedral has been an integral part of Russian history, this famous church was on the Red Square long before the first Romanov dynasty came to power and survived both a war with Napoleon and World War II. Thankfully, time has remained favorable to this great cathedral and now you can see it with your own eyes. Go inside and admire the nine small churches all hidden under the one roof.

You can walk around Red Square and see where history was made with merchants, farmers, revolutionaries, soldiers, and Soviet citizens all calling Red Square their home. Go inside of the GUM Department Store and imagine when the store first opened its doors, baffling its visitors with intricate architecture and exquisite goods.

Following this, you can see the changing of the guards in the Alexander Garden, a ceremony held every day in honor of the fallen soldiers of the Great Patriotic War (World War II). On this concise tour you will be able see the most famous Russian landmarks, whilst learning their history and taking pictures that will remind you of this magical place for years to come.

Read more
COVID-19 information
The following health and safety measures are in place, so you can relax and enjoy your experience.
What's included
What's not included
What to remember
Read more
Provider
Walks With Folks
Booking fee
Good news! No extra fees are applied to this booking.
Cancellation policy
Receive a 100% refund if you cancel up to 1 day before the experience begins. 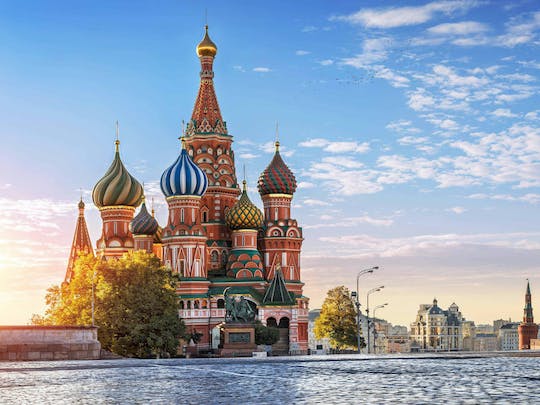 Private tour to St. Basil's Cathedral and the Red Square in Moscow

Mobile voucher accepted
from:
$52.50
Sorry, it's sold out
Unfortunately all tickets have been sold out for this event

Take a journey through the Novodevichy Cemetery in Moscow. Explore the most unusual and noteworthy burial sites of famous people.

Make the most of your time in 33 cities around the world with this TravelMate app on your smartphone. Listen to detailed audio commentaries in your language.

Buy your Empire State Building tickets with us and admire NYC from the 86th-floor Observatory. Buy express pass tickets for a more efficient entry!

Duration up to 2 hours
Instant Confirmation