Meeting point:
You will be picked up from your hotel in Negombo, Waikkal, or Marawila. Please indicate your pickup location at checkout and confirm your pickup time directly with the local operator.
What to remember
Read more
When
Read more
Provider
Aitken Spence Travels
Booking fee
Good news! No extra fees are applied to this booking.
Cancellation policy
Receive a 100% refund if you cancel up to 1 day before the experience begins. Mobile voucher accepted
from:
$80.38
Sorry, it's sold out
Unfortunately all tickets have been sold out for this event Discover Colombo's museums and highlights during this private tour with pick-up! Be ready to ride a top-notch ATV through Sri Lanka's first ATV Adventure Trail during this private tour with pick-up! 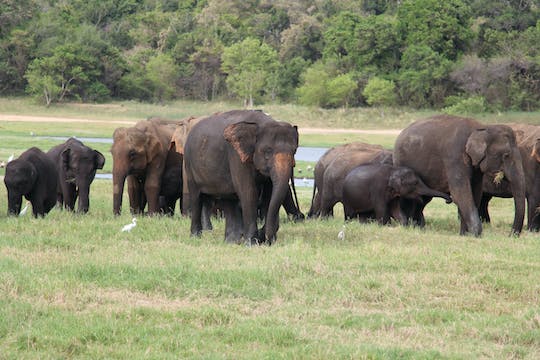 See elephants, sloth bears and leopards at Wilpattu National Park. After an unforgettable day in the wild, enjoy a delicious lunch at a local restaurant.

Enjoy two hours of discovery and fun on a safari tour of Udawalawe National Park, the best park to spot elephants, water birds and other wildlife in Sri Lanka. Discover Colombo's highlights in half a day with a private guide. Explore the mystical Gangaramaya Temple and do some shopping at Odel House of Fashion.