Your first stop is at the Thingvellir National Park where the Icelandic parliament was founded over 1000 years ago. At Thingvellir, you will see how the earth is ever so slowly pulling apart along the North-America and Eurasian tectonic plates and you will be able to stand where the Viking settlers stood centuries ago to edict national laws.

Next, you will visit the Geysir geothermal area in Haukadalur where you can see geysers, hot springs, steam vents, and eerie blue algae. Strokkur is one of the largest and most powerful geysers and erupts almost every 5 minutes.

The final stop of the Golden Circle takes you to Gullfoss waterfall, which many consider being the queen of Icelandic waterfalls, as it is both high and mighty and stumbles dramatically in a deep gorge. You'll have a chance to stop for a lunch break at Gullfoss Café, before trying out the Superjeep vehicles off-road: the ride will take you to the highlands, rough terrain and glacier area of Langjökull (Icelandic for "long glacier"), known to be the second-largest ice cap in Iceland (953 km2). You will enjoy the landscape from your Superjeep while occasionally stopping to see the incredible sights.

After an off-road ride, you will visit Faxi, a small but beautiful waterfall before driving back to Reykjavik.

Highlights of the Golden Circle and Langjökull Superjeep tour:

What to remember
Read more
When
Read more
Provider
Superjeep.is
Booking fee
Good news! No extra fees are applied to this booking.
Cancellation policy
Receive a 100% refund if you cancel up to 2 days before the activity begins. 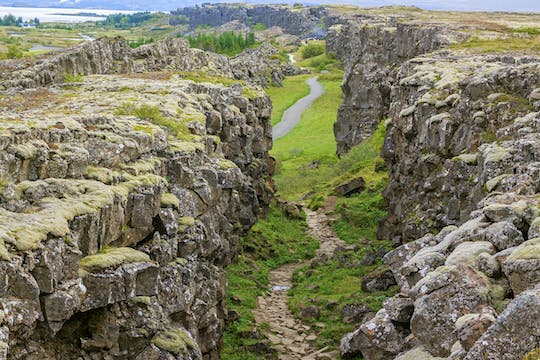