based on 2 reviews
Free cancellation

See the main monuments of Ancient Rome on a 3-hour, small group tour. Travel back to the days of the Roman Empire as you explore the Colosseum, the Roman Forum, and the Pantheon. Walk in the footsteps of Roman emperors and fearless gladiators.

Meet your guide by the Pantheon, the majestic temple of all gods, commissioned by Marcus Agrippa in 27 BC. Used as a burial site since the Renaissance, the Pantheon's tombs include the painter Raphael and two kings of Italy.

Then, explore the Colosseum, the greatest amphitheater built by the Romans. Your guide will bring 2,000 years of history to life, telling stories of the ferocious battles between man and beast put on for Roman citizens. Commissioned by Emperor Vespasian in 72 AD, and inaugurated by his son and successor Titus in 80 AD, the amphitheater remains one of the world's architectural marvels.

Next, follow in the footsteps of Roman emperors on a walk through the Imperial Forum, and learn how it was once the center of religious, political and commercial life in Rome. Hear the history of the Temple of Antoninus and Faustina, and learn about the Tabularium. Go to the Temple of Hadrian, now incorporated into a later building in Piazza di Pietra, and see the original Roman street level below ground. You'll also visit the sacred area of Largo di Torre Argentina, an archeological site that hosts the remain of four Roman temples.

Meet your guide at the corner of Piazza della Rotonda with Via della Rotonda, where the Pantheon is situated. Once arrived in the square and in front of the Pantheon, look on your right-hand side. Your guide will be waiting for you holding a "Mea Tours" sign.

What to remember
Read more
Provider
Mea Tours&Events
Booking fee
Good news! No extra fees are applied to this booking.
Cancellation policy
Receive a 100% refund if you cancel up to 24 hours before the experience begins. 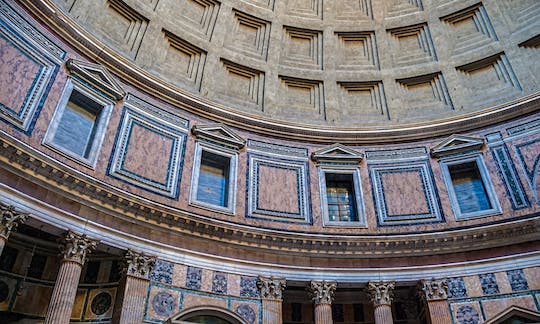