Istanbul is where Europe and Asia collide, and where the past and present meet. You'll catch an early-morning flight to Turkey's largest city and spend a day exploring its rich heritage. Among the sights you'll visit are the Blue Mosque, the Topkapi Palace, the Egyptian Bazaar and Galata Bridge.

On arrival in Istanbul, you'll enjoy a guided tour of the old town before heading to the Blue Mosque – so called because of the blue tiles that adorn its vast prayer hall. Next up is the Hippodrome – the site of ancient chariot races – where you'll see the German Fountain, Serpent Column and more. You'll then have free time for lunch.

The afternoon is spent exploring the Topkapi Palace. The ‘forbidden city' where the Ottoman sultans lived, it's packed with crown jewels and lavishly decorated rooms. After free time to rummage around the Egyptian Bazaar, there's the option of a cruise on the Bosporus and dinner by the Galata Bridge before heading back to the airport.

Pick-up times can vary depending on your flight

You'll need your passport to travel Rumour has it Cleopatra used to be a regular at the Dalyan mud baths. It's the healing properties that puts them on the region's must-see list – the mud is supposed to completely revamp your skin. After showering off, you can have a dip in the natural sulphur pool, where the temperature hits a cosy 40°C. Rounding off the morning is a visit to the weekly market at Ortaca. Haggle for some tasty fruit or maybe find a nice souvenir to take home. It's a great chance to mingle with the locals.

Want an adrenaline rush like no other? Then get ready to paraglide over the Blue Lagoon at Ölüdeniz. You'll feel the cool mountain breezes as you drive up Mt Babadag. This 1,700-metre peak looms over the lagoon and is the launch pad for your flight. After a how-to session, zip into a flying suit and hook up to your parachute. Then it's time for you and your pilot to take the run up and launch into the air. Look down and all you'll see are your toes, the Blue Lagoon, white beaches and the green slopes below. You'll feel like a bird, gliding peacefully on the warm currents and you're allowed to take photos during the descent too.

Winding its way from Lake Koycegiz to the Agean, the River Dalyan is home to freshwater and loggerhead turtles. Leaving early morning, your eco boat will glide along the Dalyan, floating by reed beds towards Iztuzu Beach on the coast. Your skipper will slow down as we pass the ancient Lycian tombs, carved into cliff faces thousands of years ago. Next, hop on a coach and head for Iztuzu Beach, where you might glimpse some of the loggerheads that nest on its protected sands. Once we've arrived, you'll visit a turtle rescue centre and enjoy some free time on the beach.

This is our ultimate Dalyan tour – and it's easy to see why. First on your to-do list is an eco-friendly cruise on the River Dalyan - you'll cruise past the ancient Lycian Rock Tombs dating back to 400 BC and have some time to plunge into the anti-ageing mud and soothing sulphur pool. After lunch, head to Dalyan town. Here, you'll have an hour to explore a bazaar. Iztuzu Beach is the icing on the cake. On this long, sandy strand, we'll drop by a turtle sanctuary that rescues and treats injured turtles. You'll also have free time for swimming or sunbathing.

Cast off on an adults-only cruise around Göcek for a day of sun, sea and snoozing. Set sail into the Aegean and you can soak up every inch of Göcek's gorgeous scenery as your skipper pilots you to some standout beauty spots. With plenty of space to top up your tan, you can relax on deck as we find the perfect place to drop anchor for a swim. Between dips in the water and catching a few rays, you can enjoy a drink or two from the open bar and fresh fruit served up by the crew. There's also a delicious lunch and dessert, followed by more time for swimming, sunbathing or snoozing in the shade. 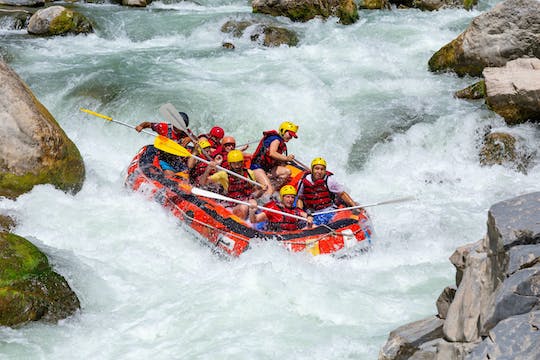 This full day tour is a chance for thrill-seekers to conquer the bubbling whitewater rapids of the River Dalaman. Beginners, advanced and everyone in between can join in this whitewater rafting tour. A buffet breakfast will welcome you to the experience before being shown the equipment and given a lesson on rafting rules. Hit the water, and we'll raft downstream, navigating the turns and twists with your guide to help you. Take the chance to look up, and you'll find you're surrounded by forest scenery and wild nature. Then, once the adrenalin has worn off, you'll have lunch and pick out your photos and videos.