Overlooking a picturesque harbor and dominated by a splendid Romanesque cathedral, Trani amazes visitors with its breathtaking cityscape rich in history and harmonious architecture, both influenced by Frederick II of Swabia who made Trani his maritime fortress. Discover all the wonders of this beautiful town with a local guide!

Trani reached its maximum splendor in the 1400s when it became a fundamental maritime center and trading hub in the lower Adriatic. From the Middle Ages to the 18th century, many noble palaces were built in the city and contributed to enhance its already appreciable heritage.

The tour starts from the Swabian Castle built in 1233 under Frederick II and continues to the Romanesque Cathedral dedicated to Saint Nicholas the Pilgrim, the most distinctive symbol of the city. Enjoy a pleasant walk around the picturesque tourist harbor with characteristic fishing boats, admire the Ognissanti Church and the Fortress of Sant'Antonio and visit the Jewish quarter.

In front of the Swabian Castle.

What to remember
Read more
When
Read more
Provider
Agenzia Martulli Viaggi
Booking fee
Good news! No extra fees are applied to this booking.
Cancellation policy
Receive a 100% refund if you cancel up to 24 hours before the experience begins. free cancellation
Duration up to 24 hours
Instant Confirmation
(16)
from:
$63.00 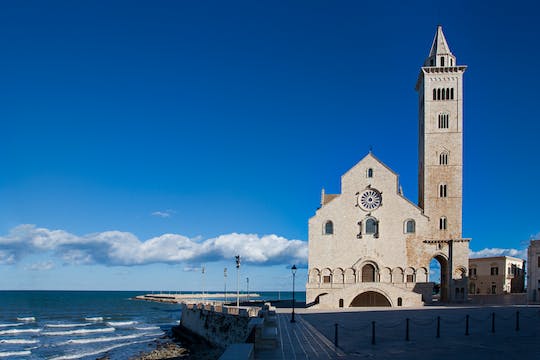 Discover Trani, known as 'the pearl of the Adriatic' on a guided walking tour of its imposing castle, Romanesque cathedral, and most characteristic districts!