You can’t see a country, if you don’t visit the countryside. On this tour you will explore landscapes and places that you would have never thought existed in Greece.

Your first stop will be the Corinth Canal, a manmade canal built at the end of the 19th century, that connects the central Mediterranean Sea to the Aegen Sea. Before taking a two hour drive from Athens to the cog railway station in Diakofto where you'll head off to explore the mountainous village Zachlorou on a 45 minute train ride between the mountains, rivers and gorges.

Close to Zachlorou is the Byzantine monastery of “Mega Spilaio” that was built under a rock. After seeing the monastery you'll head off to visit the small historical town of Kalavrita and have lunch in a local tavern.

On your way to the Cave of Lakes, you'll encounter several small villages, tower houses and the hidden temple of the Goddess Artemis. The cave of lakes is a unique geological phenomenon, 13 lakes found in the interior of a cave which are neither common around the world, nor in Greece.

The "Cave of Lakes" is a paleontological and biospilaiological interest with fossilized human bones and various animals including the hippopotamus found on the lower floor of the cave.

What to remember
Read more
When
Read more
Provider
EASY EXPERIENCES
Booking fee
Good news! No extra fees are applied to this booking.
Cancellation policy
Receive a 100% refund if you cancel up to 24 hours before the activity begins. 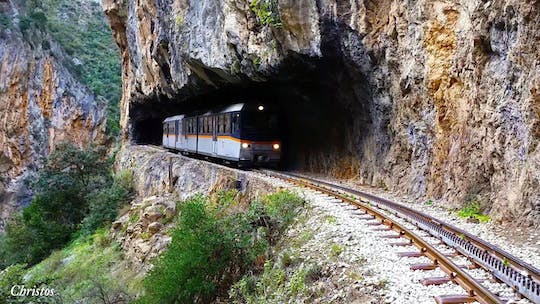