Founded by the Spartans, and one of the largest cities in the world by 500 BC, Taranto is still an important port city and naval base to this day. This half-day tour will give you an introduction the city with a guided walk around the old town and new town followed by free time for shopping.

You'll explore this city of two halves, concentrating first on the old town, which is spread over an island protecting a lagoon, Mar Piccolo. You'll see the 15th century Aragonese castle, which overlooks the swing bridge over to the mainland, as well as the ruins of an ancient 6th century BC Temple of Poseidon.

After checking out the cathedral, one of the region's oldest Romanesque buildings, you'll head over to the new town, which follows an airy, grand 19th century design. Then at the end of the tour, you'll have time left over for shopping or bar hopping.

Read more
COVID-19 information
The following health and safety measures are in place, so you can relax and enjoy your experience.
What's included
What to remember
Dress appropriately – no shoulders or knees showing – when visiting religious buildings
Read more
Provider
TUI ITALIA S.R.L.
Booking fee
Good news! No extra fees are applied to this booking.
Cancellation policy
Receive a 100% refund if you cancel up to 1 day before the experience begins. Join this experience, dedicated to all the lovers of small villages, who wants to discover the simplicity and the tradition of the most rural places. Visit Locorotondo and Cisternino, and taste local specialties. 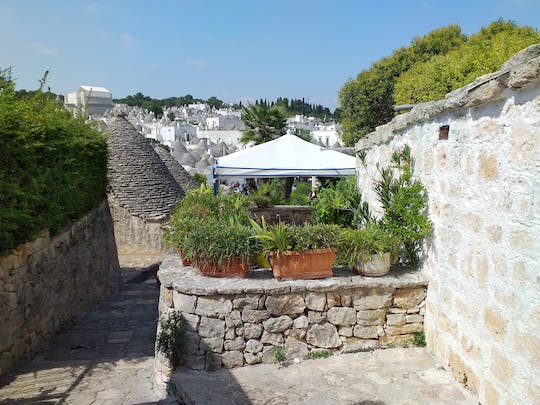 This full day tour allows two of Puglia's gems to shine brightly. Your first point of call will be Alberobello. Famous for its ‘trulli' houses, you'll learn all about why these cone-shaped dwellings were so popular and how they were built as you explore the town. Next stop will be the whitewashed city of Ostuni. Here, your guide will lead you around its alleys, medieval arches, wide piazzas and take you to views over the coastal plain. And you'll have time to ponder the façade of the 15th century Cathedral of Santa Maria Assunta on your travels. 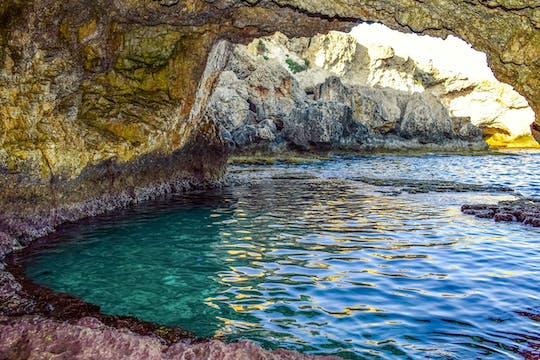 The scenic shores of Salento are your destination on this afternoon boat cruise. Board the boat early afternoon and begin your coastal adventure to the southernmost point in Puglia – a place where the Ionian Sea turns into the Adriatic. You'll see some impressive sights including sea caves that you'll stop to take a peek at. Watch sandy beaches pass by and sit back while soaking up all the different colours of the sea, including emerald, bright blue and turquoise. On the way back, you'll also anchor up for a well-deserved swimming stop in front of a sea cave.

free cancellation
Duration from 2 hours to 4 hours
Instant Confirmation
from:
£36.00 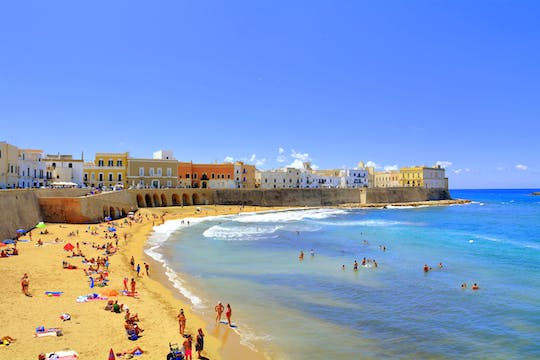 Call in at historic Gallipoli for a half-day tour of its highlights. Leaving early afternoon, we'll drive by sweeping views over the Ionian Sea and arrive in Gallipoli for a guided tour. Wander by baroque chapels and maze-like lanes beneath the 14th century walls as your guide fills you in on the history of this ancient port before some free time to explore. Stop by one of the corner cafés in the cobbled backstreets, shop the boutiques, or take a walk along the promenade. What's more, you'll also visit an underground olive oil mill for a tasting.

Get a real snapshot of local life in Gallipoli with this morning visit to the city. Arrive early morning and you've free time to explore at your own pace. Explore baroque chapels and maze-like lanes beneath the 14th Century walls and you'll soon see why the ancient Greeks called this the ‘beautiful city'. Stop by one of the corner cafés in the cobbled backstreets, shop the boutiques, or take a walk along the promenade. The real star of the show here is the traditional fish market where you can watch locals barter back and forth for the best price. You'll return to resort early afternoon.

free cancellation
Duration from 2 hours to 4 hours
Wheelchair Access
from:
£17.00 Discover why the city of Lecce is one of Puglia's must-sees with this half-day tour. With buildings adorned with gargoyles, cherubs and gremlins, Lecce's version of baroque will distract you with its sheer ornateness as you wander around. You'll head into the city known as the ‘baroque pearl of Salento' for free time to explore. See all the main showstoppers, including the cathedral, the Piazza del Duomo and Roman amphitheatre. And round it off with a tasting of rustico leccese pastry and leccese coffee before returning to your resort.