Nothing tickles the imagination of children like pirate ships. Take a trip with yours onboard the Pedra Sartaña for some swashbuckling maritime fun and adventure – and some well-earned down time for yourselves.

The Pedra Sartaña is a real Spanish Schooner with towering masts and ornate woodwork – which was in active shipping service until 1970. Now it has become the ultimate fantasy playground for your under-sized marauding shipmates. As she sets sail through the sparkling Atlantic Ocean, the kids get stuck into all sorts of fun stuff, including hoisting the sails, pirate games and treasure hunts – all led by our tough-taskmaster of a ship's captain.

When she drops anchor offshore, there'll be more maritime fun and games, and snorkelling and swimming in the warm clear water – but they won't be forced to walk the plank! These supervised activities and lunch on board will give the adults a little relaxation, and the delight of the little ones after a half-day of piratical fun should be one of the highlights of their holiday. All the more so if you end up seeing some dolphins off the bow.

Read more
COVID-19 information
The following health and safety measures are in place, so you can relax and enjoy your experience.
What's included
Where
MUELLE MORRO JABLE
What to remember

Mobile voucher accepted
from:
£51.00
Sorry, it's sold out
Unfortunately all tickets have been sold out for this event 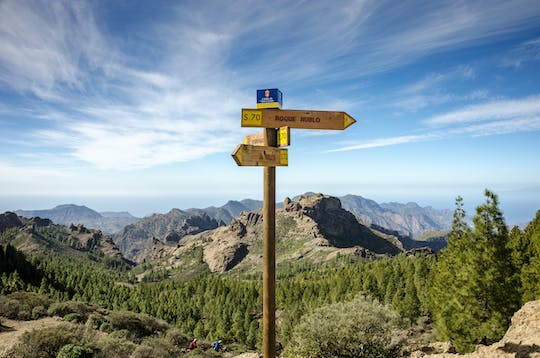 One Canarian island sometimes isn't enough – which is why this Gran Canaria tour from Fuerteventura is ideal. You'll discover the big island to the west from head to toe, visit volcanic craters, remote hamlets, endless sand dunes and big cities. All in one amazing day. After an early pick-up, we'll board the two-hour ferry to Las Palmas. The action starts straight away as we head to the Bandama crater before continuing to Valle de San Roque. In the Valsequillo area, you'll be able to taste a few delicacies. We'll climb towards Pico de las Nieves en route to lunch at Llanos de la Pez. 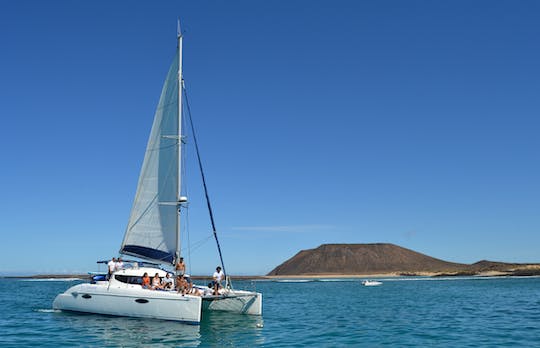 Lying just off the northern tip of Fuerteventura is Isla de Lobos – the ‘Island of Wolves'. It makes the perfect foil for a day at sea in a luxury catamaran. For four blissful hours, we'll sail off this arid volcanic isle while enjoying the pleasures of the sea. Dive in for a swim or snorkel, or try your hand at kayaking. This is pure, unadulterated fun Fuerteventura style. Sailing from Corralejo, the Oby catamaran has room for just 12 guests and you'll receive full VIP service on board. We'll drop anchor off Lobos and that's when the fun – or relaxation – begins in earnest.

Free cancellation
Duration from 2 hours to 4 hours
Meal Included
from:
£436.00 Seeing one island's crystal-clear waters and marine life from a glass-bottomed boat is a treat. Getting to take in three different ones is positively spoiling yourself. Set off on your aquatic adventure and the glass-bottomed boat gives you a unique underwater perspective as you float over to Playa Blanca. You'll be able to sunbathe on the boat's deck or take some free time to explore. Lunch is served before you sail by Lobos – an uninhabited island between Lanzarote and Fuerteventura. Contemplate the coastline, view the sea life from the panoramic windows, then snorkel in the warm Atlantic waters just off shore before heading back to port.

Free cancellation
Duration from 4 hours to 8 hours
Instant Confirmation
from:
£45.00 This day trip to the centre of the island explores the historic town of Betancuria and the fishing village of Ajuy as well as an aloe vera plantation and a farm. Setting off in a comfortable eight-seater minibus, your first stop is the aloe vera plantation. And at a farm, you'll enjoy an olive oil tasting. Then, in Ajuy, you can check out the view from the chalk cliffs overlooking the black beach and the fishing boats. Later, a scenic drive through mountains takes you to the colonial town of Betancuria. See the church and enjoy a cheese-tasting session at a nearby goat farm, before you round off the day with a traditional lunch. If you like a spot of angling, this deep sea fishing trip in the Atlantic is right up your street. You'll sail out into the strip of ocean separating Fuerteventura from Morocco in search of fish – and fun. This half-day excursion mixes action with passion to create an exciting experience. The catch of the day could include a marlin or a swordfish. You'll have to pull out all the stops to land one of these big boys. Dangle your bait over the side, and you could hook a mahi-mahi or a wahoo. And if you don't have any luck, simply sit back and soak up the sun. When one Canary island visit isn't enough, a private Gran Canaria tour from Fuerteventura is ideal. Discover the big island to the west from head to toe. On an exclusive trip for just you and your party, you'll stop by the volcanic Bandama crater, Maspalomas sand dunes and the island capital, Las Palmas, all in one day.