Discover one of the most scenic lakeside towns in Austria during a private tour.

Hallstatt is not only one of the oldest towns in Austria but also one of the most scenic lakeside towns in Europe. Experience the magic of the town built on a narrow strip of land between the lake and the mountains. Admire a real-life fairytale place of great natural beauty and awes tricking scenery. Both the city and the lake are included in the Hallstatt-Dachstein/Salzkammergut Alpine UNESCO World Heritage Site since 1997.

Learn more about the production of salt in the city that dates back to prehistoric times and find out more about an entire culture spawn at the beginning of the Iron Age, known as the Hallstatt culture. Stroll through the streets of Hallstatt and uncover the market village, one of the most attractive places to visit. Finally, admire the 19th-century Evangelical Church of Hallstatt.

Meeting point:
Meet your guide at the Franz Josef I Monument. Your guide will hold a signboard together with the name of the guests on it.
What to remember
Read more
Provider
Global Guide Services GmbH
Booking fee
Good news! No extra fees are applied to this booking.
Cancellation policy
Receive a 100% refund if you cancel up to 5 days before the experience begins. 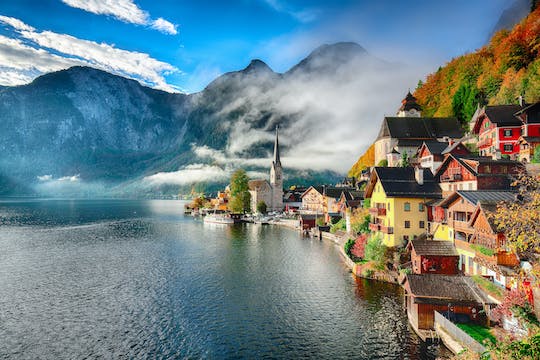 Explore all the highlights of Hallstatt on a private tour. Hear fascinating facts about what makes it so special while you visit the most charming places in the city.

Hire your very own personal photographer in Hallstatt who knows all the beautiful photo spots which will make your Instagram account pop.

Book a personal photographer in Hallstatt to discover the main sites and hidden photo spots. Learn about the local culture, get the best recommendations on what to do while having a professional photographer to capture these moments. Book an exclusive tour only in the Christmas period, visit the most beautifully decorated places in Hallstatt and fill your heart with joy.

Book an exclusive family-friendly walking tour that will make sure the kids have as much fun sightseeing as adults. Stroll around the city center, see the famous cultural sites and hear stories that are guaranteed to provide a few giggles.