Things to do in Havana Surrounded by forest-carpeted mountains and splashed by waterfalls, Las Terraza's landscape is so impressive, it's a UNESCO Biosphere Reserve. On this 4x4 tour of Cuba's first ever eco-village, you'll do some wildlife-spotting, swim in the Rio San Juan river and sample local coffee at the famous Buena Vista plantation. Then, top it all with a Creole lunch. 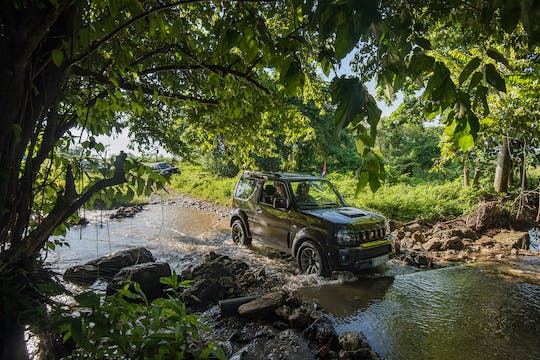 This 4x4 safari is a cocktail of all that's amazing about Cuba. It's starts on a high at jaw-dropping Bacunayagua bridge and never looks back as you continue your rollercoaster ride through the wilds of Mayabeque and Matanzas provinces with coral reef snorkelling, cave visits and lunch in a farm.Your adventure kicks off the moment you depart from your hotel in a 4x4, aiming for Bacunayagua – Cuba's tallest bridge. Feast your eyes on the Yumuri Valley – more than 100m below. Next, it's time to go under as we snorkel along the reefs of Coral Beach and the epic Saturno Cave, a 20m-deep flooded cavern.After drying off, we'll drop into La Dionisia farm, on the site of a former colonial-era coffee plantation. Nurse a welcome cocktail while a traditional Cuban lunch is cooked up for you. You can then go horse riding or simply relax. Rounding off the day is a visit to the Bellamar Caves, where crystallised stalactites look like wax from molten candles. From castles to cabaret, this trip takes you from Havana's oldest landmarks to one of its most famous night-time shows. Visit Morro Castle before heading to an Old Havana restaurant for dinner and then watch the cannon shot ceremony en route to famed Parisien show to round off the evening in style. There are few better ways to explore the calid waters off Varadero than this luxury catamaran cruise. This full day jaunt includes free time and a seafood barbeque on a tropical beach on Cayo Blanco – and sea swimming and snorkelling.After setting sail from Varadero Marina, relax aboard en route to your first stop, Rancho Cangrejo – a platform in the middle of the sea. Then, head to tiny Cayo Blanco. This place has a real desert island feel – all powder-like sands, swaying palms and turquoise waters. Drop anchor and hit the beach for a lunch of fresh prawns, lobster, octopus, chicken and rice.After lunch, roll out a towel on the beach or take a dip in the warm ocean. Snorkelling off the beach is also recommended – the waters here are teeming with tropical fish. Then, relax back on board, sipping on complimentary rum cocktails and beer as you make the afternoon sail back to the Varadero. 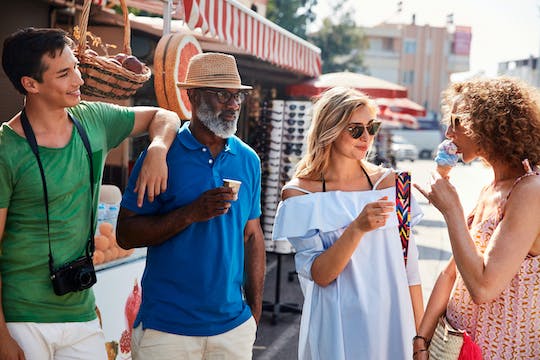 Take a daytrip to Varadero – Cuba's paradise playground. Picked up from your Havana hotel, you'll be whisked to this tropical peninsula to spend the day enjoying the all-inclusive luxuries of a five-star resort. Soak up some sun on the sugar-white sands, sip cocktails from the bar and tuck into a buffet lunch. There are watersports on offer, too. Set in the iconic Hotel Nacional de Cuba, Le Parisien Cabaret is an entertainment spectacular that harks back to Cuba's bygone era of glitz, glamour and gangsters. Wowed by bongos, beats and bikini-clad showgirls, you'll sit in the same spot that was at once the hangout of American mobsters and vintage stars like Frank Sinatra and Ava Gardner.As venues go, the Hotel Nacional de Cuba is tough to beat. All marble and mahogany, the whole place oozes elegant 1930s style – a fitting home for the Le Parisien Cabaret. Built by the ‘Mob's Accountant' Meyer Lansky, the theatre pays homage to those heady, pre-revolution days that hosted a raft of classic stars.Grab a drink from the bar and check out the celeb-bedecked Hall of Fame before taking your seat for the main event. All-singing, all-dancing, the dazzling show mixes traditional Cuban music with rumba, mambo and Latin-jazz alongside plenty of feathers, sequins and showgirls. 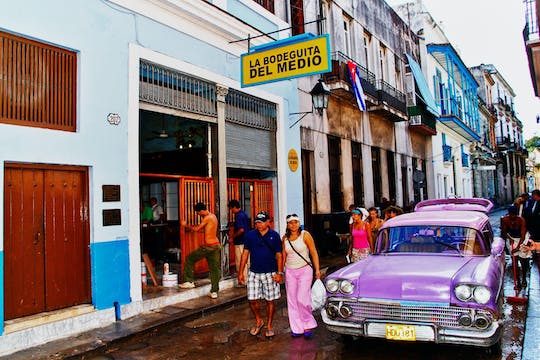 Like rum, cigars and vintage American cars, Ernest Hemingway is synonymous with Havana. On this tour you'll visit his homes and haunts – La Finca Vigia, Cojimar and Las Terrazas are all on the itinerary, as well as his favourite bar, La Floridita.The fun kicks off at Finca Vigia, the elegant suburban villa that was his final Cuban retreat – it's where he wrote For Whom the Bell Tolls – and it still looks as if he'd just run out the door, with papers, books and even his typewriter in situ. Then you'll head to Cojimar, the fishing village that inspired him to pen The Old Man and the Sea.We break for a cocktail and lunch at Las Terrazas restaurant, where he used to dine with the skipper of his yacht. Then it's on to Floridita – where an imposing statue of the man props up the end of the bar – and the Bodeguita del Medio, two of his favourite hangouts. You can bid farewell to Ernest at the Hotel Ambos Mundos, where his old room is now a mini-museum, which exhibits unmistakable traces of his presence such as empty bottles of rum and bourbon. 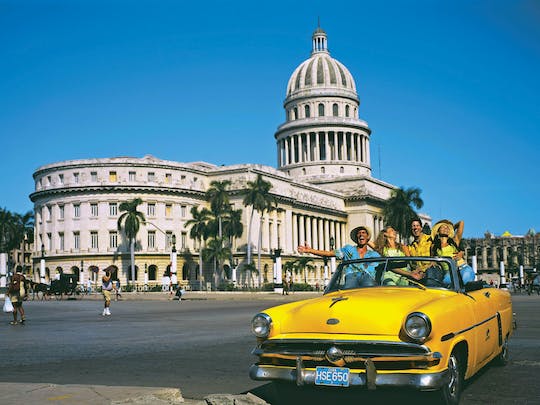 With its peeling Spanish buildings, 1950s American cars and cigar-chomping locals, Havana looks and feels like something from a movie set. And this tour immerses you in the capital's charms. Among the sites visited are Old Havana, Revolution Square, Colono Cemetery and the Vedado district. Rambo eat your heart out – you ain't seen nothing like Trinidad and the Topes de Collantes. This tour has so much action that you'll need two days to work your way through it. You'll even get to ride in a Red Army truck and slide down rapids.It's a fairly genteel start to proceedings, as you discover the stopped-in-time charm of Trinidad, a town so pretty that it's a UNESCO World Heritage Site. Once a bastion of sugar production, it's now a warren of cobbled alleys lined with peeling pastel-coloured houses with big grilled windows. After a guided tour, head to the jungle and overnight in a secluded hotel in the Topes de Collantes Nature Reserve.Day 2 kicks off with a bang. Hop into a vintage Red Army truck for a rip-roaring trail through the mountains. Hold on tight – the terrain is very rough. Then it's time to ramble for a few kilometres towards waterfalls. And if you want to rev up the action, you can wade in Rambo-style through the drops and rapids. 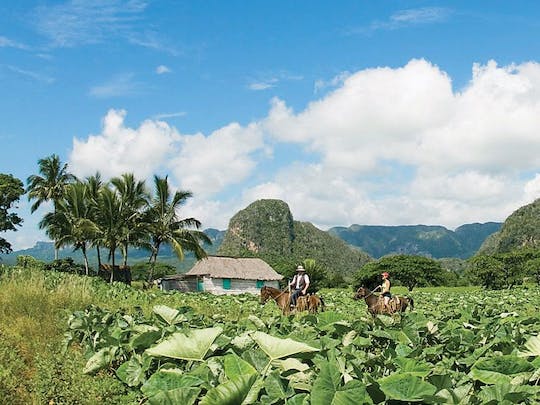 The Viñales Valley is Cuba's prime ‘tobacco country' – but to highlight this aspect is to do a disservice to an area of such natural beauty that it is a UNESCO World Heritage Site. On this full day excursion, you'll discover its mogote landscapes, enjoy a boat trip in the famous Indian Cave and visit a cigar factory.After pick-up, you'll head west to Pinar del Rio province. The Viñales Valley is right in the heart of this rural backwater where sombrero-clad farmers are frequent sight. Think palm trees and tobacco plantations set against ‘mogotes' – limestone hills that rise steeply from the valley floor. One, the Mogote Pita, is decorated with a huge mural depicting prehistoric scenes.There'll be a visit to the Indian Cave, where you'll enjoy a boat ride along its underground river, which emerges through a crevice into a jungle. After lunch, you'll enjoy a panoramic view of Pinar del Rio city before dropping into a tobacco factory to see how a real Cuban cigar is rolled. 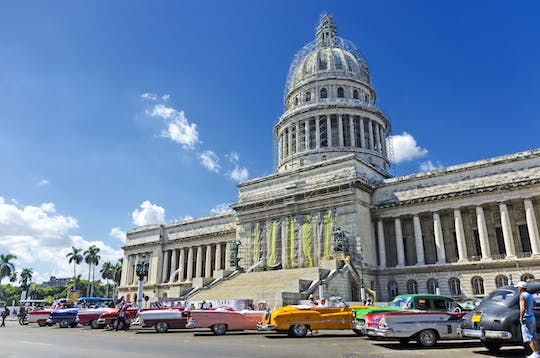 The Cuban Revolution was two for the price of one. Out went a crooked dictator and with him the mob. Havana was a playground for the Mafia, as it raked in millions from gambling and vice. This atmospheric tour takes you in a vintage car back to the 1950s and hotels associated with the gangsters – the Riviera and Nacional.To get into the mood, you'll hop into a classic car from the era and see some of Havana's top sights. Revolution Square, the crumbling Malecon promenade and the US-inspired Capitol. You'll then come face-to-face with the Mafia's activities at the Hotel Riviera, built by the ‘Mob's Accountant' Meyer Lansky. To complement the casino, he had a coffin-shaped pool built.Then, it's on to the Hotel Nacional. Learn about the mob's history and check out the celeb-bedecked Hall of Fame. Sip on a cocktail at the bar before dinner in one of the restaurants. Rounding off the day, is the hotel's exuberant Parisien Cabaret show – think feather headdresses and mambo dancing. 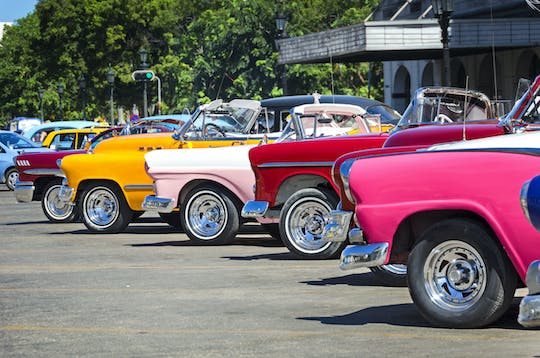 The classic American car is a true icon of Havana. Hop in one of these colourful four-wheeled beauties and cruise the city in style. Visit standouts like Revolution Square and the Capitol Building, and sample cocktails in the famous Sloppy Joe's Bar. Then, top it all with dinner in the old quarter for the real-deal Cuban experience.Like one big classic car museum, Havana's streets are packed with Chryslers, Chevrolets, Buicks and more. And alongside the city's pastel-coloured buildings and crumbling colonial architecture, they sum up her stuck-in-time feel.In a vintage ride, you'll head to Revolution Square to see the huge memorial to national hero Che Guevera and call by the Capitol Building. There'll be stops by all the must-sees of the UNESCO-listed old quarter and a cocktail tasting session at Sloppy Joe's Bar – the 50s hangout of Frank Sinatra. Snap a few selfies atop the 18th-century Morro-Cabana fortress, then round off with dinner at an authentic local restaurant. 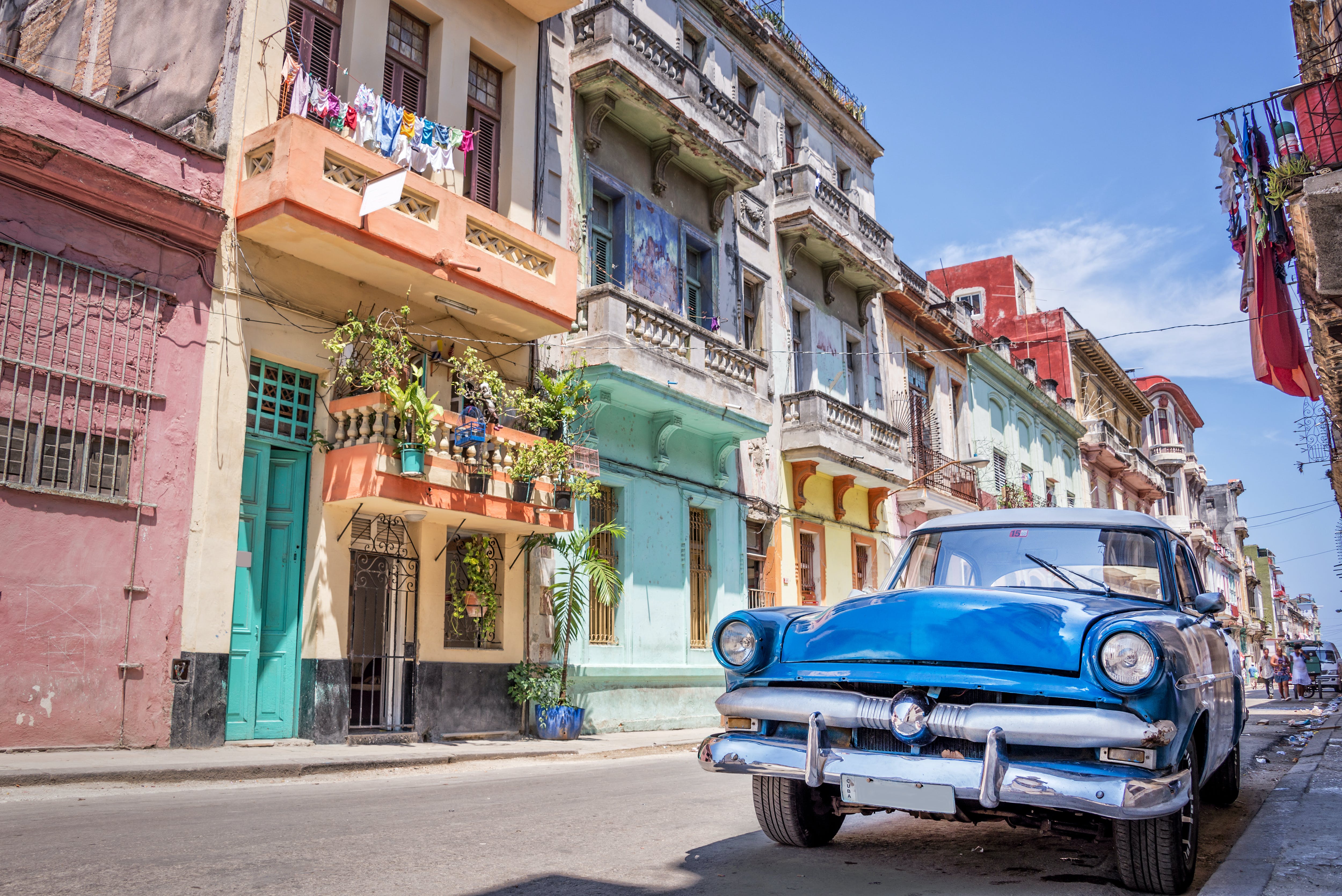 Havana
View all experiences in Havana 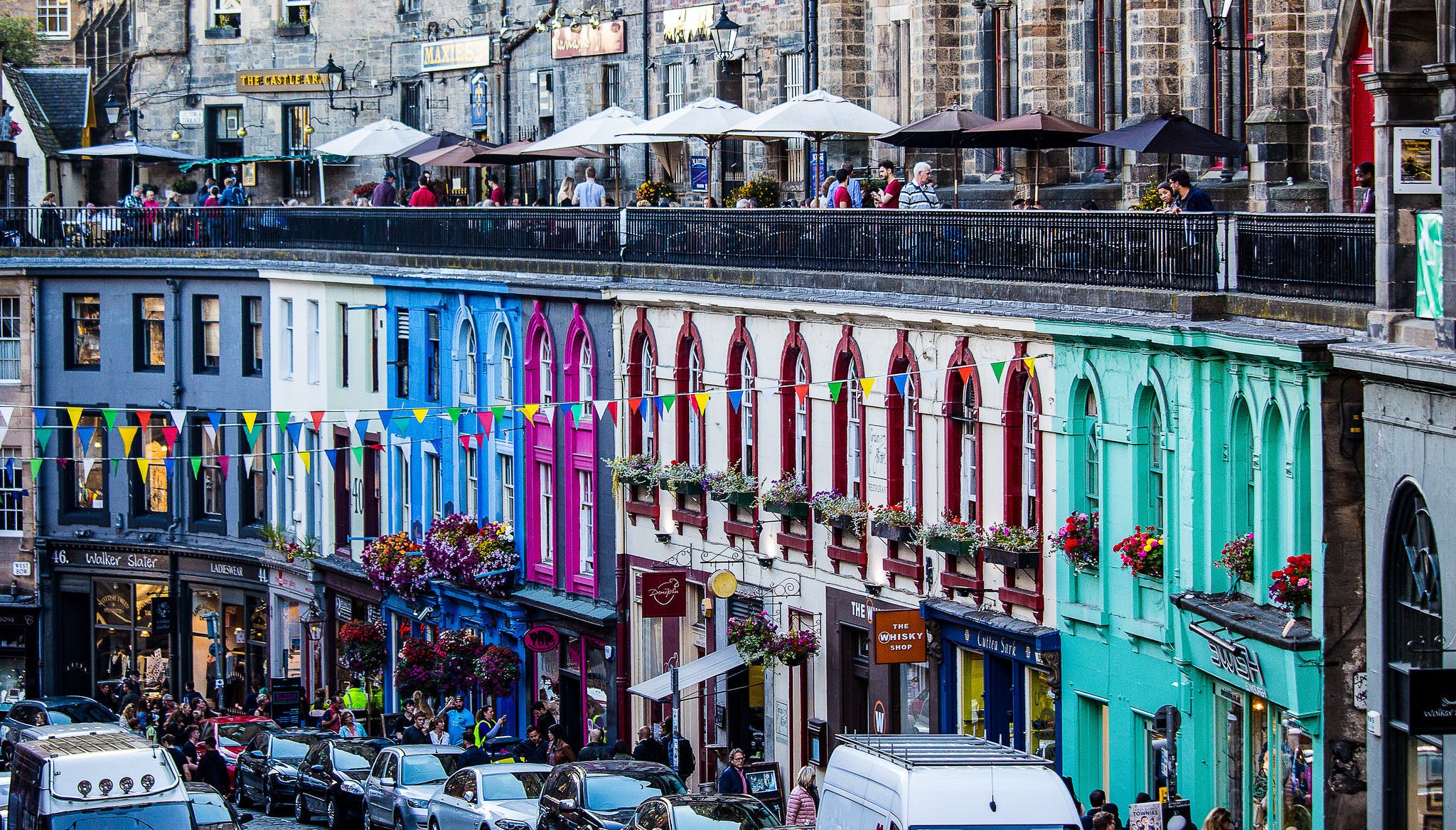