Come together right now and join this Beatles London walking tour. Stroll through the backstreets of London's most exuberant neighbourhoods and see how the legacy of The Beatles shaped the city for decades afterwards.

Alongside your tour guide, you'll wind through Soho’s vibrant alleys and side streets looking out for hidden studios, murals, album cover photos, and much more. You'll visit the site of The Beatles’ iconic rooftop concert, a lesser-known studio in which they made one of their biggest hits, the home and office of one of the Fab Four, and the birthplace of the British music scene.

From John Lennon’s humble days as toilet attendant to telling members of the Royal family to “rattle your jewellery”, this tour will keep you entertained with anecdotes from start to finish.

The tour will come to an end by the art gallery where John Lennon met the artist and love of his life, Yoko Ono. What was it about her art that drew him to Ono? You’ll find out all about it on this tour!

Meeting point:
Meet the guide at street level next to the station exit in front of 12 Argyll St.
What to remember
Read more
Provider
Brit Music
Booking fee
Good news! No extra fees are applied to this booking.
Cancellation policy
Receive a 100% refund if you cancel up to 24 hours before the experience begins. 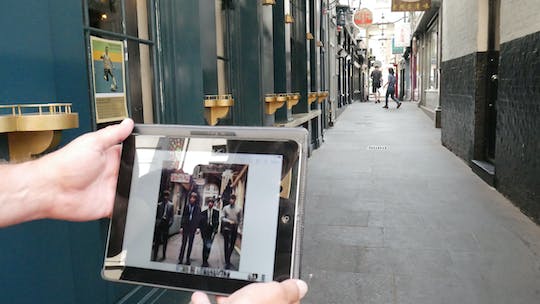