Discover Luxembourg, the capital of one of Europe’s smallest states, on a private and guided walking tour.

Admire Luxembourg’s medieval fortified Old Town, a UNESCO World Heritage Site at the shores of the River Alzette. Stroll through the winding alleyways and discover grand squares, churches, and palaces on every corner. Enjoy the mixture of styles that range from Gothic, Renaissance, and Baroque architecture. See the monument of Dicks and Lentz, dedicated to the two national poets by the same name and who wrote the anthem of Luxembourg.

Pass the Grand Rue, one of the most luxurious venues in the old town of Luxembourg, and get entangled in the “knot”, or Knüdler, the name by which the Place Guillaume II square is known. Marvel at the equestrian statue of Duke William II on the very same square. Admire the façade of the Jesuit-built Notre-Dame Cathedral, the only cathedral in the country.

Meet your guide in front of the Cityshopping Info Point. Your guide will hold a signboard together with the name of the guests on it.

Go on a romantic Luxembourg walking tour where you will follow clues to discover amazing places and local stories using your smartphone. 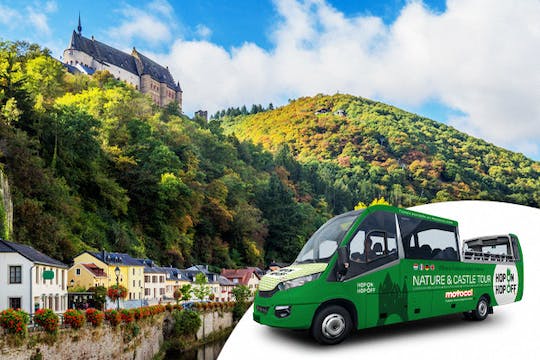 Learn more about local history, drive through the fascinating nature in the Müllerthal on a convertible bus and visit the oldest city in Luxembourg. Discover Luxembourg City in a unique way: find clues and complete the puzzle in an escape app-guided tour!

Book now an original self-guided tour in Luxembourg City Center and discover the city while playing an escape game with family, friends, or colleagues!

Book now an original self-guided tour in Luxembourg and discover the city while playing an escape game with family, friends, or colleagues!

Duration from 2 hours to 3 hours
Available in:

Walking tour in Luxembourg with a self-guided city trail

Explore Luxembourg in a unique and affordable way. A self-guided city trail will guide you to the best spots in the city while playing fun riddles and assignments on your smartphone.