Marrakech is a city of intrigue, spice-scented souks, and exotic charm that holds thousands of layers of history. This day tour includes highlights such as the Koutoubia Mosque, Bahia Palace, Medina and fondouks allows you to scratch the surface and peel back the layers of this ochre-coloured city.

You'll start at the Koutoubia Mosque and minaret, one of the largest in the western Muslim world. We'll head on over to the Bahia Palace with its intricate decorations and then to Maison Tiskiwin to see Bert Flint's art collection, before pressing through the labyrinth of the Medina's artisan area. Watch local cooperatives at work and browse traditionally-made handicrafts, after which we'll sit down for lunch in one of its famed riads.

Then we'll dip into the Marrakech souks and fondouks where bright colours and oriental smells line the streets before stopping at a café for a drink and a pastry. We'll round off the tour at the buzzing Jemaa el-Fnaa square, the life and soul of the city. 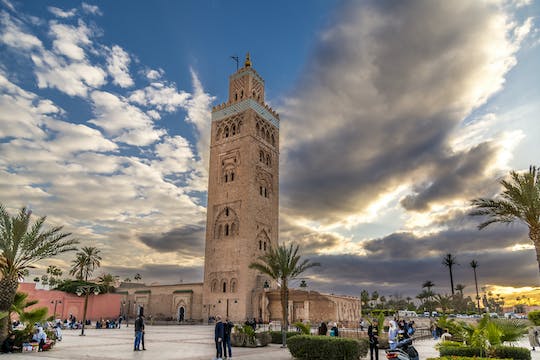 If adventure and remote mountain villages are your thing, then this 4x4 ride into the High Atlas Mountains ticks all the boxes. You'll head into the panoramic mountainous landscape just a short drive from Marrakesh and discover typical Berber villages as well as your adventurous spirit.Hop into an air-conditioned 4x4 and start your journey into the High Atlas Mountains. You'll leave behind the city in exchange for palm-lined valleys, rose gardens and scented fruit trees as we head out into the wilderness. Enjoy photo stops at breathtaking locations, see local pottery being made in the traditional way and sip on a refreshing mint tea in a traditional house.We'll drive along scenic roads through rainbow-coloured mountains and the Asni valley, where we'll break for a traditional lunch. You'll have some free time to explore the village of Asni before driving back to the hotel via Tahannaoutt. Essaouira is a character-filled seaside city that's known as the ‘Jewel of the Atlantic'. It's famous for its Medina and European military architecture, and infamous for its pirate haven past. You'll explore its harbour, Medina and arts scene on this day tour from Marrakech, and you'll also have a free afternoon to soak up its bohemian atmosphere, fish auction and souks.On arrival in Essaouira, your guide will take you on a tour of the city past the port, municipal market, jewellers' district and artisan centre. Its mellow atmosphere, narrow winding streets, colourful shops, whitewashed houses, and heavy old wooden doors make it a wonderful place to wander around.Once you have a feel for the place, you'll have free time for lunch and to check out the artisan shops and galleries. We'll also visit an argan oil cooperative where you can try some local products. The sands of the High Atlas are sprinkled with silver screen stardust. On this epic tour, you'll travel by 4x4 to Telouet, rumble across the dizzying Tizi n'Tichka mountain pass, and visit the UNESCO World Heritage Site of Aït Benhaddou. It's a blockbuster. This is one of our TUI Collection excursions, which give you a local flavour of the destination while showcasing its unique, authentic and responsible values.Your 4x4 adventure in the Atlas Mountains kicks off with the ascent to the spectacular Tizi n'Tichka pass, stopping at Taddart and Telouet – a crumbling kasbah on the former caravan route that linked Marrakech to the Sahara. There's a break for lunch en route, too.Then, at Aït Benhaddou, you'll explore beyond its ksar walls, where Hollywood films such as Gladiator and Lawrence of Arabia were filmed. Its merchant houses are a great example of earthen clay architecture. There's also a pit stop for an authentic cup of Moroccan tea before returning to Marrakech. Marrakech by night is magical – and as the sun begins to set over the medina, the night-time entertainment turns the atmosphere electric. You'll enjoy your own magical experience in with a horse-and-carriage tour and time to soak up the captivating Jemaa el-Fnaa square in the evening.Hop on to a horse-drawn carriage and tour the main sights in and around the medina. You'll trot along the 12th century ramparts and down the main avenue Mohammed V. Then take in the views from the Hivernage district, through Bab Jdid, Bab Ighali, Mechouar – the Royal Palace district – towards La Kasbah Mellah and the UNESCO World Heritage Site of Jemaa el-Fnaa. At this time of day, it's less crowded.The square is the life and soul of the city. By day, it's a space for vendors to sell their fresh produce, but by night it takes on a completely different air and the show begins to unfold. Watch storytellers and cooks preparing sizzling food – an absolute must-see in Marrakech. Bongos, beats and bikini-clad showgirls – Fuego Latino brings the best of Brazil to Morocco. Whisked to the venue, you'll be seated and served a three-course meal that includes all-you-can-eat Brazillian barbeque meats. And depending on your ticket option, you'll wash it all down with unlimited soft drinks or a half bottle of wine. Fueled up for the fun, sit back and prepare for the main event. All-singing, all-dancing, the dazzling show mixes traditional Moroccan music with rumba, mambo and Latin-jazz alongside plenty of feathers, sequins and showgirls. Glitz, glamour and lots of excitement – it may just be the best night of your holiday. 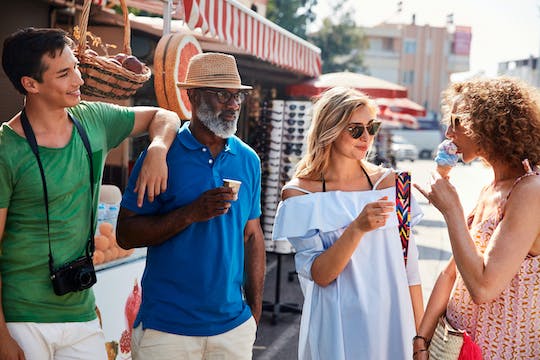 Moroccan cuisine is more than just mint tea and tagines. Learn the finer points of North African cooking with a visit to the Moroccan Culinary Arts museum. Then, try your hand at creating a couple of classic recipes courtesy of a cooking class. And after picking up some new skills in the kitchen, you'll dine on your dishes for lunch.