Phang Nga Bay had a starring role in the 70s James Bond movie, The Man with the Golden Gun. With this longtail boat tour around the bay's green-capped karsts and cave-lined isles, it's easy to see why. You'll coast by Khao Phing Kan – better known as James Bond Island – visit Koh Panyee floating village and stop by Suwankuha Temple, too.

First up is a stop by the 15m long, Golden Reclining Buddha at Suwankuha Temple. And if you think the statue looks relaxed, just wait until we cast off into Phang Nga Bay. Cruising the emerald waters in a traditional long-tail boat, we'll visit Koh Panyee Island for lunch – home to a nomadic group of Moken people, also known as the Sea Gypsies – and Talu Island.

Read more
COVID-19 information
The following health and safety measures are in place, so you can relax and enjoy your experience.
What's included
What to remember
Not suitable for guests with reduced mobility. Children must be supervised by an adult (over 18 years) at all time. Bring bathing gear and sunblock. Bring a towel. Money for extras or gratuities. Drinks not included. Subject to weather conditions. Please note that all times are approximate and subject to change
Read more
Provider
TUI DESTINATION EXPERIENCES (THAILAND) LTD.
Booking fee
Good news! No extra fees are applied to this booking.
Cancellation policy
Receive a 100% refund if you cancel up to 1 day before the activity begins.

Getting away from the crowds is just what this tour promises. You'll jet off to the islands of Ko Rok and Ko Haa in search of some of the best-visibility snorkelling spots. Spend the day swimming, snorkelling and speeding through the Andaman Sea on this speedboat cruise from Phuket.You'll kick off this tour in style as we zoom towards Ko Rok. But first, we'll make a quick detour. It's only accessible during high tide, but the emerald green lagoon at Pileh Cove will take your breath away. Jump off the boat and grab a few pics from the water. Next, we'll speed off to Lonely Beach on Ko Rok.Here, you'll be greeted by powder-white beaches, turquoise waters, banyan tree forests and nothing but your own footprints in the sand. It's all coral reef around here, so snorkelling is a treat. Enjoy a Thai lunch here, and before you know it you'll be gliding over the corals in the protected lagoons of Ko Haa.

Think of all the comforts and luxuries of a beach club – but at sea. As you'll discover on this full day catamaran trip, HYPE more than lives up to its name. With sunloungers, an on-board DJ and tasty tapas, sushi and Thai food served, this is another way to experience Phuket. And to round off the day, there's an Andaman Sea sunset to look forward to. 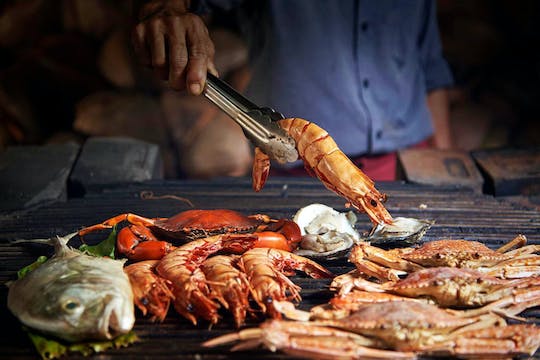 The icing on the cake of any Phuket holiday is a tasty seafood dinner as the setting sun paints the sky orange. And there's no better place for it than Kan Eang, one of the island's most famous restaurants. Prepare for the sort of feast that comes from five decades of experience serving succulent dishes made from the freshest catches in the Andaman Sea. Half day City tour of Phuket

This half-day city tour is a great way to get to know Phuket. We'll visit the famous Big Buddha statue and Wat Chalong temple, taste locally-grown cashew nuts and honey, and take in views over the offshore islands from Kata viewpoint. Then, we round off in Phuket Aquarium to see the many species of sea life and watch the shark-feeding shows, too.

Save time in Thailand with an express ferry transfer across the Andaman Sea. Take advantage of daily departures from Phuket to Phi Phi Don and enjoy Thailand's tropical scenery on each leg of the journey with a return ticket.

Free cancellation
Duration up to 1 hour
Entrance Fees Included
from:
£46.00

A full day at sea and in the sea. This deluxe speedboat tour features both Phi Phi Islands and two islets. First up is snorkelling and sightseeing at Khai Nu before zooming over to Yao Yai for beach time and lunch. In the afternoon, explore Ton Sai Bay and Monkey Beach on Phi Phi Don. Then it's on to Phi Phi Lae to discover Viking Cave, Pileh Cove and Loh Samah Bay.