Sarajevo is rightfully considered one of the most interesting and authentic cities. Muslims and Christians called it the sheer, and Jews called it Little Jerusalem and together they formed unique customs and built the city as we know it today.

This walking tour will show the old town as well as religious heritage. Walk through the Town Hall, the most extravagant example of Austro-Hungarian architecture. Then, continue to Baščaršija Square, visit the ottoman quarter and the oriental charm of cobbled streets. Next on the agenda will the Jewish quarter, the mosques and churches, The Old Orthodox Church, Gazi Husrev-bey Mosque and the Cathedral of Jesus’ Sacred.

Sarajevo really does have something for everyone. This tour will entice your imagination and make you want to explore the city even more.

Meeting point:
Meet your guide at Sarajevo City Hall
What to remember
Read more
When
Read more
Provider
Blossom Trip
Booking fee
Good news! No extra fees are applied to this booking.
Cancellation policy
Receive a 100% refund if you cancel up to 24 hours before the experience begins.

Mobile voucher accepted
from:
£13.00
Sorry, it's sold out
Unfortunately all tickets have been sold out for this event 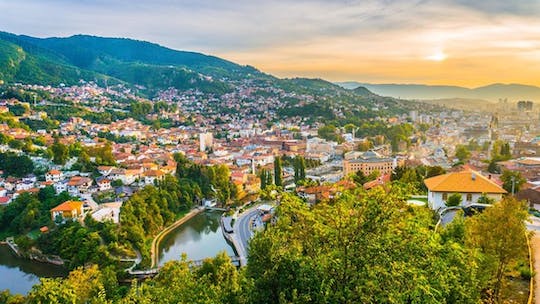