Looking to see two destinations in one? How about a short day trip from Stockholm, heading north to the city of Uppsala, Sweden’s fourth-largest city and home to the country’s first university. Approximately 40 minutes by train from Stockholm, it’s cute, easily walkable, well worth the visit, and a city filled with cultural treasures that not everyone knows about. If it’s off the beaten path that you’re looking for, Uppsala is a secret worth hearing (and seeing).

What are these hidden (mostly from tourist crowds) gems right before your eyes, you ask? First, a man who is known as “The Flower King” who studied and worked in Uppsala. He was (and still is) famous for his work, and spent time with everything and everyone from plants to royalty (sometimes at the same time!). You’ll see his work and the guide will reveal his story while at the Botanical Gardens.

Meanwhile, things are getting “warmer” as you're moving toward another Uppsala secret treasure. You’ll scout for it at Gustavianum, the oldest remaining university building built in 1625, where some of the university’s most famous scientists and their inventions and creations are celebrated… Care to take a guess?

On to the final location on this quest for the secrets of Uppsala, you enter into the most visible sight on the city skyline, in search of the tomb of one of Sweden’s most famous kings (he sent the Danes back to Denmark, and Sweden has been independent since).

As the tour will travel by train to and from Uppsala, the journey will be accompanied by Swedish countryside passing by outside the window. Arriving back in Stockholm, you’ll have unlocked the door to a unique destination in Sweden. Question is, can you keep Uppsala’s Secrets?

Meeting point:
Stockholm Central Station, outside the main entrance – located at Centralplan 15
What to remember
Read more
When
Read more
Provider
OURWAY Tours
Booking fee
Good news! No extra fees are applied to this booking.
Cancellation policy
Receive a 100% refund if you cancel up to 3 days before the experience begins. Mobile voucher accepted
from:
£538.00
Sorry, it's sold out
Unfortunately all tickets have been sold out for this event

In the vivid exhibition, you will meet the Vikings through movies, scenery, projections and sound effects as well as archaeological objects. 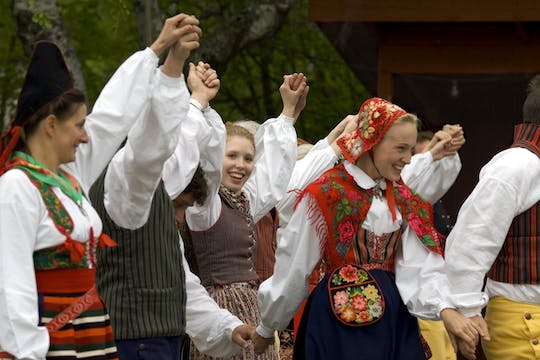