On your 4-hour tour of Barcelona you will visit the most iconic highlights that the city has to offer and some of its best kept secrets including skip-the-line tickets to Sagrada Familia! Upgrade your experience at the checkout to a private tour to enjoy the city in a group with only your friends and family or join a small group tour.

After meeting your guide at the tour providers offices, you will drive to the famous hill of Montjüic, to admire the panoramic views of the city and stand in the site of the 1992 Olympic games. Then make a brief stop to see the exterior of the Catalunya National Art Museum (MNAC), constructed in 1926 featuring a giant dome inspired by St. Peter's Basilica.

During your journey to the iconic Sagrada Familia take in the sights of Passeig de Gracia, home to the famous designer stores, and the setting for two of Barcelona's most talked about Gaudï buildings: La Pedrera and Casa Batlló.

Explore the exterior of the UNESCO World Heritage Site at the Hospital de Sant pau I de Santes Creus, built between 1901 and 1930. This hidden gem is well off the usual tourist route and is one of the greatest symbols of the Modernist Architecture in Barcelona.

Finally, you will arrive at Sagrada Familia and speed past the legendary long queues with your skip-the-line tickets. For many, this is the main highlight of any trip to Barcelona. Go inside the church to view the most famous work of Antoni Gaudí, and learn about the architecture of the building with your knowledgable tour guide.

Your group will then head to the oldest part of Barcelona, the Barrio Gótico, to stroll through the narrow winding streets of the medieval quarter visiting the traditional indoor food markets at Mercat de Santa Caterina.

From here you will tour the Jewish Quarter's Royal palace, the original 2000 year old Roman Temple and part of its Cathedral.

The tour will end in the Born district, where the guide will suggest a variety of restaurants that you can go to for lunch to taste traditional Catalan tapas, which will be followed by entering the magnificent Santa Maria del Mar church.

Meet your guide at the office of Explore Catalunya, opposite the Palau de la Música. 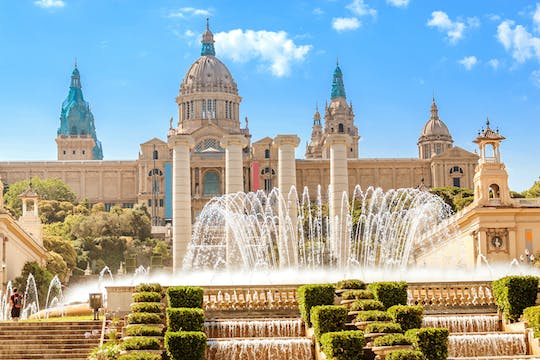 Mobile voucher accepted
from:
$102.00
Sorry, it's sold out
Unfortunately all tickets have been sold out for this event