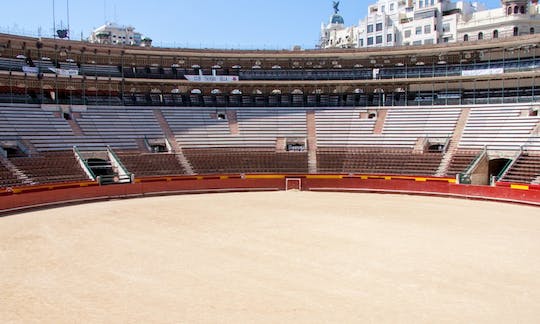 On this tour you will discover the true essence of Spain and the activities that make up our character. We will start in the Bullfighting Museum of Valencia, one of the oldest and most important of Spain, with a permanent collection that shows the evolution of the Valencian bullfighting from the 19th century until today, the Bullring history (Plaza de Toros) and the role of the protagonists: the bullfighter and the bull. As a curiosity, into there you'll see a life-size stuffed bull, unique in all the country!

You’ll access to the Bullring to traverse the spaces that make it up. It is one of the most significant buildings in Valencia, declared National Monument and Cultural interest, with a capacity of 10,500 spectators. You will be surprised with its majesty and beauty!

The tour will continue through the most emblematic places of the downtown of Valencia, as the Plaza del Ayuntamiento – the heart of the city - the Lonja building, the traditional Plaza Redonda, the singular Cathedral, the Plaza de la Virgen square, to end up in the Serranos Towers, one of the ancient walled city gates, that still survives in perfect condition.

Xátiva street (at the Bullfighter Monument, located in front of the Bullring)

Thursday, Friday and Saturday, all year round:

Read more
Provider
La mar de cerca
Booking fee
Good news! No extra fees are applied to this booking.
Cancellation policy
Unfortunately, we can't offer you a refund nor can we change or cancel your booking for this particular product, due to our partner's policy.

Mobile voucher accepted
from:
$ 329
Sorry, it's sold out
Unfortunately all tickets have been sold out for this event Every Wednesday different theme and always the best hip hop and r&b music. Don't miss it! This Dutch... Our famous Rentrée together with FAYER. We will have one of the most respected international DJs. Ta...