Visit Barcelona at your own pace aboard one of our double-decker red buses. Hop-on and hop-off as many times as you wish through the day with a single ticket. Switch routes and discover Barcelona with an audio guide system. Now available in 15 different languages! Visit the Barcelona Aquarium which is the largest Mediterranean-themed aquarium in the world!

The West route (orange) will take you to discover the city beyond its most emblematic modernist buildings. The itinerary covers an extensive circuit that will take you to the westernmost landmarks of Barcelona, such as the FC Barcelona stadium and the National Museum of Art of Catalonia. Hop-off at any of the two museums and board the bus back again once you have finished your visit. Go to El Born and enjoy the amazing cuisine and quaint ambiance or sit back, relax and enjoy the view of the city.

The East route (green) will take you to the most artistic part of the city. Capture Barcelona's concrete jungle of modernist buildings. Sit back and relax aboard one of our buses. From Plaça Catalunya to Park Güell, admire the most impressive landmarks around this part of town. See the magnificent Sagrada Familia and marvel at the extensive symbolism of its façades. Learn about this city's history and discover all the secrets it hides. You will receive a map with all relevant information on the service and the stops, as well as a discount booklet for several shops and restaurants in the city. The frequency of the service varies depending on the season.

The Aquarium of Barcelona is the largest Mediterranean-themed aquarium in the world. To discover its fascinating species, immerse yourself in its facilities and see 14 aquariums that represent the Mediterranean’s different marine communities. Learn about the most characteristic traits of the species living in each aquarium. Observe two habitats inspired in protected areas on Spain’s coastline: the Ebro Delta and the Medes Islands. Finally, take a walk through the acrylic tunnel that runs the length of the Oceanarium, which gives you the feeling of swimming with sharks.

Meeting point:
You can decide if you want to first visit the Aquarium or enjoy the Barcelona City Tour
What to remember
Read more
When

Barcelona Aquarium: daily fro 10.00am to

Read more
Provider
Julia Travel
Booking fee
Good news! No extra fees are applied to this booking.
Cancellation policy
Receive a 100% refund if you cancel up to 1 day before the experience begins. 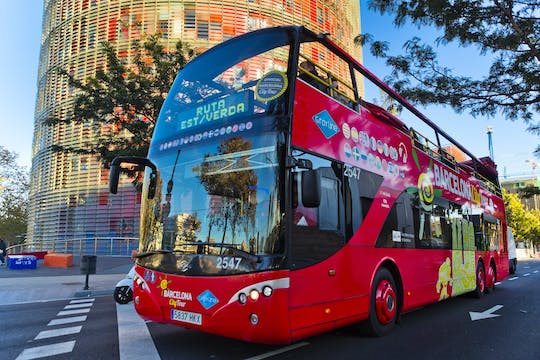