Go on a thrilling trip to the famous Transylvanian castles! See the house of Dracula, the Black Church and historical cities on this small-group tour from Bucharest.

Start your day trip with a guided visit to the inside of Peles Castle, set in the scenic mountain resort of Sinaia. Explore the Romanian royal family’s former summer residence. Built in the German Renaissance style between 1873 and 1914 by Carol I, the palace is considered one of the most beautiful of its kind in Europe. The visit will take approx. 2 hours.

Next, go to Bran to see the residence of the world's famous vampire - Dracula. The imposing construction, originally built as a fortress at the former border between Wallachia and Transylvania, looks out over a valley from its strategic position. Feel the allure of its Gothic appearance while you learn about its infamous ruler, Vlad the Impaler, and its legendary vampire.

The final stop is the town of Brasov, previously known as Kronstadt. Its well-kept historical center is filled with centuries-old homes connected by small streets paved with cobblestone. Your walking tour of this lovely town full of medieval charm will start from the main square and the Gothic Black Church (inside visit). See the old City Hall, watchtowers, walls around the former citadel, and the narrowest street in Europe. Conclude your tour with return transport to your hotel in Bucharest.

This partner offers pickup and drop-off from centrally located hotels. Please, confirm your pickup location directly with the local partner. You can find the contact information in the voucher after booking.

What to remember
Read more
When
Read more
Provider
One Excellence Tours
Booking fee
Good news! No extra fees are applied to this booking.
Cancellation policy
Receive a 100% refund if you cancel up to 24 hours before the activity begins. 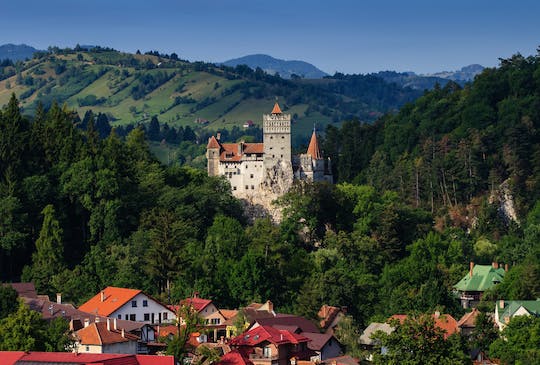