Ticket to see the Unto These Hills play

Discover, surrounded by traditional Cherokee values and modern sensibilities, one of America’s most powerful dramas which rewrites the Cherokee’s place in the world.

Starting from feeling a chill, not only from the mountain winds shifting their direction but from the anticipation of the start of the live drama. Then, you will experience a tragic and triumphant story of the Cherokee that traces back to the years before the heartbreak of the Trail of Tears to the present day.

Next, the play opens with the arrival of the Spanish Conquistador, Hernando DeSoto in 1540. Then, the discovery of gold in Cherokee County in 1835 sets the stage for tribal lands to be overrun and generally disregard the cultural practices and freedoms of the Native population. Also, during this time, unscrupulous land agents descend upon the area, carrying out the Manifest Destiny ideology, as well as creating deep divisions among the Cherokee people. It is at this point where the heartbreaking story of Tsali and his family begins to unfold. At the end of the play, you'll marvel at the sculpted imagery and effective emotional symmetry, symbolizing the re-emergence of a people whose spiritual fortitude, social complexities, and human courage will never be broken.

Please show your voucher at the entrance.

What to remember
Read more
When
Read more
Provider
Cherokee Historical Association
Booking fee
Good news! No extra fees are applied to this booking.
Cancellation policy
Receive a 100% refund if you cancel up to 24 hours before the experience begins.

Ticket to see the Unto These Hills play Book your entrance ticket to Oconaluftee Indian Village to experience 18th Century life for the Cherokee Indians of the North Carolina mountains, plus see craft demonstrations by award-winning artists. 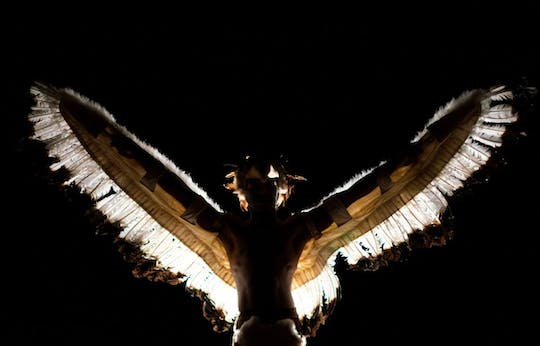 Unto these Hills and the Indian Village ticket package

Book your Unto these Hills and the Indian Village ticket package to have the best Cherokee cultural experience.