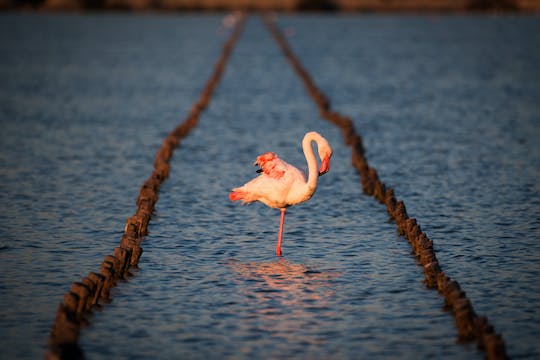 The Park is an exceptional area due to the presence of fresh and saltwater basins that host plants and animals of rare beauty, including the wonderful pink flamingos. Created in 1999, the park is a site of international interest that had already been included in the Ramsar Convention since 1977, due to its importance as a place of rest, wintering and nesting of several species of waterfowl.

Departing from the Port of Cagliari you will travel through the new bike path along the channel "Palafitta", and then into the park. Once there, admire the remains of the Old City of Salt, which for centuries has characterized the economy of the area, and then reach the nature trail where you'll have the chance to admire some flamingos in their natural habitat. Enjoy a visit to the small town of Serdiana to visit Argiolas winery, one of the most important wine... Join a cultural walking tour to explore the city of Cagliari! Discover more about Sardinia's capital... Discover the ancient Sardinian tradition of cheesemaking visiting Argiolas Formaggio, one of the mos... Take part in an unforgettable excursion to discover the wineries of Cagliari! Wine production has pl... Tour of Masua and Porto Flavia

Discover the Iglesiente territory, one of the oldest historical areas of Sardinia. A wild area whose... Enjoy a cooking class in Sardinia and learn more about traditional bread baking in a family-run bake...