Travel back in history on a half-day tour from Istanbul enteringr the naval harbor of the Byzantines and see the Golden Horn, St Savior in Chora, Anemas Dungeions, Tekfur Palace, the Byzantine City Walls and much more!

In the Natural naval harbor of the Byzantines see the Golden Horn, named because of its hornlike shape and golden reflection of the glittering waves under sunshine when viewed from the hill tops. Visit the Patriarchate at Fener which is the seat of Orthodox Christianity since Constantine The Great’ s declaration of Christianity as the religion of Roman Empire.

Enter the Church of Panagia of Blachernae, the best known and most celebrated shrine of the Holy Virgin famed with the “Hagiasma” (holy water) and the “Hagion Lousma” (sacred bath). See St. Savior in Chora (Kariye Museum), originally a Byzantine monastery with fantastic mosaics and frescoes portraying scenes from the bible, the life and miracles of Jesus.

Walk around the Anemas Dungeons (from outside) were part of the Blachernae Palace, unique in the world with its historical and architectural structure. Consisting of 14 separate dungeons, each having 2 basements below sea-level with cells for the prisoners and two towers. It was used as a prison for high ranked statesmen. View Tekfur Palace (from outside) built in the 12th century adjacent to the city walls, the only surviving pavillion of the Blachernae Palace and the Byzantine City Walls surrounding the acropolis of Byzantium with 22 km long fortification with 96 towers and 9 main gates dating back to the 5th century.

During your tour you will visit:

Please confirm the pickup location and time directly with the local operator. You can find their contact information in the voucher after booking. If pick-up is not available at your hotel meet your tour in front of Tamara Restaurant at the old City at 2.00pm.

What to remember
Read more
When
Read more
Provider
Plan Tours & Gray Line Turkey
Booking fee
Good news! No extra fees are applied to this booking.
Cancellation policy
Receive a 100% refund if you cancel up to 1 day before the experience begins. 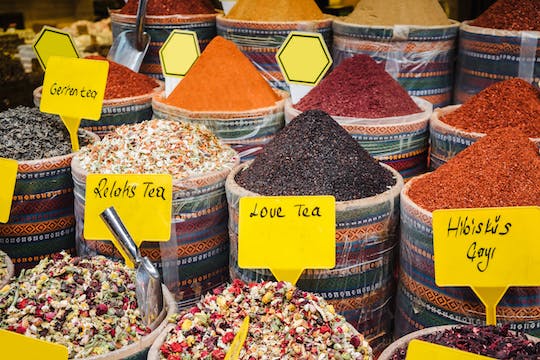 free cancellation
Duration up to 2 hours
Instant Confirmation
from:
$189.00