Explore Peru's past and present with a half-day guided tour. The trip begins in Barranco, Lima's most bohemian suburb and the preferred location to enjoy the nightlife of the city. You will see Barranco's Central Park, the Municipal Library, the traditional Bridge of Sighs, the colonial homes, and the famous boulevard. Next, you will drive down the South Pacific Coast Highway to Pachacamac, the most important ceremonial center on the Peruvian coast during pre-Inca and Inca times.

Pilgrims went to this large complex to pay homage to the creator god Pachacamac. Throughout the centuries Pachacamac was occupied by many different Andean civilizations such as the Lima's, the Wari’', the Ichma’s, and finally by the Inca Empire. You will see several pyramidal temples and enclosures from different time periods. Besides the ruins, you will also visit an on-site museum displaying pottery, textiles, shell and stone ornaments, as well as the wooden Pachacamac idol found during excavations in 1938.

You will coordinate your pick-up time and location directly with the local operator. Pick-up is available only from hotels located in Miraflores and San Isidro. If your hotel is located at the historic center of Lima, meeting points are the following: Sheraton Lima hotel and San Agustín Riviera hotel. You must be ready and waiting in the hotel lobby 15 minutes prior to your scheduled pick-up time. PLEASE NOTE: The tour does not include the pick-up from private residences; if you stay in them, please contact the local operator days prior to the start of the tour, in order to coordinate a meeting point (You will find their contact information in the voucher after booking)

What to remember
Read more
When
Read more
Provider
Lima Tours
Booking fee
Good news! No extra fees are applied to this booking.
Cancellation policy
Receive a 100% refund if you cancel up to 24 hours before the experience begins. 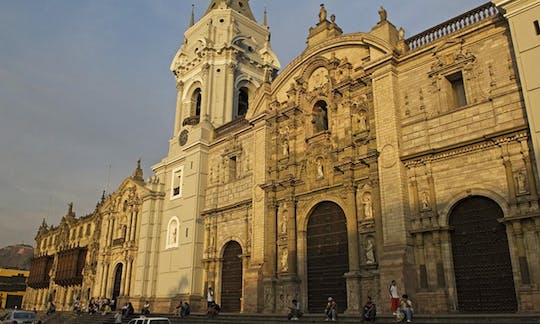 Buy your Lima City Tour with Musement with our price match guarantee and secure booking. Get informed, plan and book your amazing activities in Lima.

Visit the Larco Museum and discover the most complete pre-Hispanic collection of gold and silver. Enjoy a typical lunch at Café del Museo restaurant.

Visit the traditional market of San Isidro and take a private cooking class at Urban Kitchen.

Enjoy a guided tour of Lima and discover some of the most emblematic sites of the city.

Enjoy a guided tour that gives you the chance to visit a traditional Peruvian market and discover Lima's historical side. You will also visit the Cordano tavern, a famous place visited by politicians and famous figures of Peruvian culture.

Immerse yourself in the history of Lima with a guided tour of the city. You will discover buildings from the pre-colonial era all the way through to today. You will also visit the Larco Museum, considered one of the best in the world.