Duration: up to 8 hours
Safety measures applied
Do this because
What to expect

Brimming with history and charm, Lisbon is waiting to take you on a journey back to the age of discoveries, including the maze of "becos" in the historic center, the contrast between different city areas, and the charm of the ocean caressing the fortified Tower of Belém.

We'll start from Praca Dom Pedro IV, also known as Rossio Square, in the Baixa district. Destroyed by a terrible earthquake in 1755, Rossio is home to the Teatro Nacional Dona Maria II, built in 1840.

We will then move to the Graça Hill, with the Castle of São Jorge, before reaching the Alfama district. The hill offers several breathtaking views, thanks to the "miradouros"- panoramic viewpoints that present you with sweeping views of the city Here you can also admire Lisbon's Cathedral, also known as Sé. We will then visit Bairro Alto, a sixteenth-century area that is now the heart of local bohemian life.

Then we will drive to Belém, one of the must-see places for anyone who visits the Portuguese capital. We will see the Church of Santa Maria de Belém and the Monastery of Jeronimos, which with its inlaid facade and multiple spiers and towers is a perfect example of Manueline style - an ensemble of decorative late-Gothic and Renaissance motifs. Finally, in this very same area, we will see the famous fortified Belém Tower. Built in the middle of the sea and connected to the coast by a small bridge, it is - like the Monastery - a UNESCO World Heritage Site. 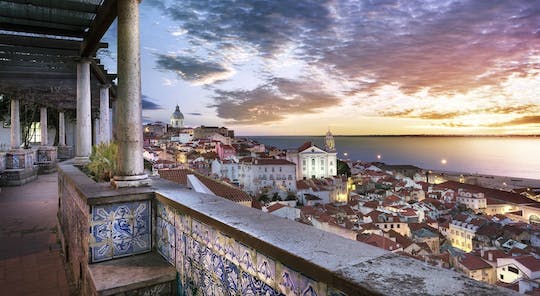 Tickets for Fado in Chiado Live Show in Lisbon

Buy your tickets and enjoy the best fado live show in Lisbon with Musement. An excellent way to discover the Portuguese culture and a musical genre, listed as an Intangible Cultural Heritage of Humanity by UNESCO!

free cancellation
Duration up to 50 minutes
Instant Confirmation
from:
$23.00