Take part in a walking tour of Pozzuoli, iconic city of the Phlegraean Fields, to retrace its Roman past and admire ancient constructions including the Flavian Amphitheater and the Macellum.

Your tour will begin with a visit to the Flavian Amphitheater, the third largest arena in the Roman world. Built by Nero, it hosted the magnificent games in honor of Tiridates, King of Armenia and was the scene of the martyrdom of San Gennaro. The building has a capacity of around 40,000 spectators, and it is characterized by the extraordinary preservation of its underground; this will give you the opportunity to perfectly imagine what was behind the scenes of the gladiator games.

Continue your experience visiting the Macellum, one of the biggest public markets of the Roman Empire. Your expert guide will tell you about the place's importance as a center of public life and economic development and about its intriguing history. As a matter of fact, during the 1750 excavations, the discovery of an Egyptian God's statue led to think that the place hosted a Temple of Serapis.

Meeting point:
At the exit of the metro station line 2 "Pozzuoli". Your guide will be waiting for you with a sign with your name.
What to remember
Read more
Provider
info@napoliofficialtour.it
Booking fee
Good news! No extra fees are applied to this booking.
Cancellation policy
Receive a 100% refund if you cancel up to 24 hours before the experience begins. 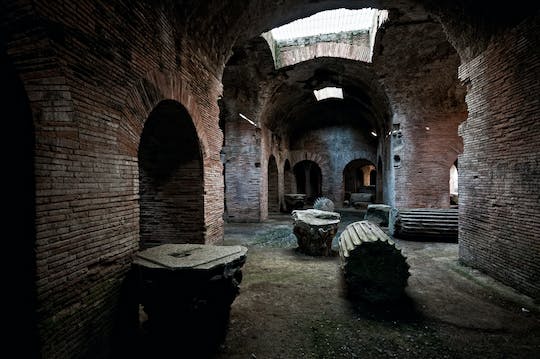