Discover Wiesbaden, the capital city of the federal state Hesse, during a private and guided tour and admire the main highlights of this elegant city.

Located on the banks of the River Rhine, the city is famous for its hot springs dating back to Roman times. Learn more about the city as a historic spa and its importance for the European Noblesse in 19th century.

See the turn-of-the-century Kurhaus (Spa House) and admire the monumental Neo-Classical building. Find out more about the Wiesbaden Casino where Dostoevsky got his inspiration for the novel “The Gambler”. Stroll along the Kurhaus Colonnade which is the longest hall in Europe supported by pillars.

Meet your guide in front of Kurhaus (Spa House). Your guide will hold a sign board together with the name of the guests on it

What to remember
Read more
When
Read more
Provider
Global Guide Services GmbH
Booking fee
Good news! No extra fees are applied to this booking.
Cancellation policy
Receive a 100% refund if you cancel up to 5 days before the activity begins. 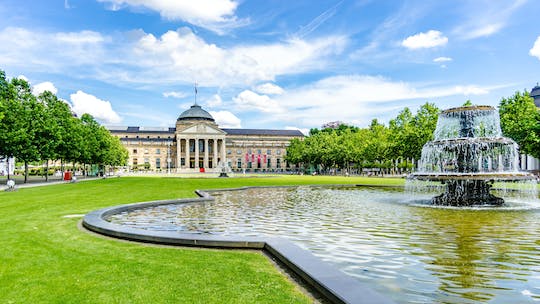