Banknotes, a stock exchange, an exchange bank, Tulip Mania and fraud, the financial legacy of Amsterdam is priceless! Follow the money from Amsterdam’s oldest document, via the Golden Age, to World War II and the city’s current position in the financial world on a 2-hour private financial tour.

Walk through the historical center of Amsterdam, starting from the Beursplein and explore five centuries of Amsterdam’s financial history. Via the Dam – the historical central square – you will head into the medieval alleyways to discover the Flemish link to the sudden success of Amsterdam in the early 1600s. Visit the street where the first stock in the world was issued and which is still the location of the municipal exchange bank.

Pass the monumental Dutch Trade Company building, which evolved into a bank and now houses the City’s Archives. Then, around the corner awaits the most prestigious part of the Amsterdam Canal Ring; the so-called Golden Bend. This strip of merchant’s houses was dominated by banking families in the 1600s and 1700s.

Along the way you will learn more about banking during WWII and the role of bankers after the war: The 1960s protests and protests against consumerism in general and former banker – then Mayor – Van Hall specifically.

Meeting point:
Meet your guide at Beursplein, in front of Bistro Berlage. Your tour will end at the Rokin.
What to remember
Read more
When
Read more
Provider
Historical Amsterdam Tours
Booking fee
Good news! No extra fees are applied to this booking.
Cancellation policy
Receive a 100% refund if you cancel up to 48 hours before the experience begins. 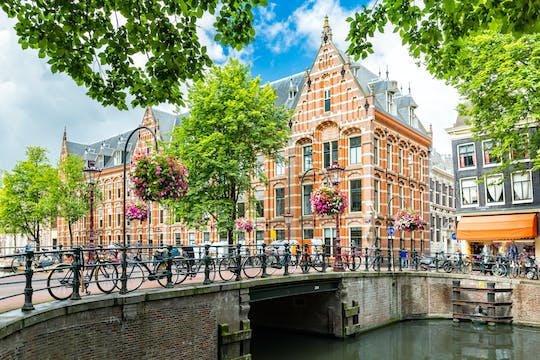