Enjoy this small group tour exploring Greek famous monuments and the city's rich history! Start at the House of the Greek Parliament, admire the Monument to the Unknown Soldier, and watch the changing of the guards. The tour will continue passing by National Garden, St. Paul’s Church - Catholic Cathedral, Schlieman’s House (Numismatic Museum), Academy, University of Athens, National Library, and Russian Orthodox Church.

The next stop is at the Panathinaiko Stadium, known as a cradle of the first Olympic Games. You will pass by Zappion (Conference and Exhibition Hall) and by the Roman Temple of Olympian Zeus and Hadrian’s Arch. A pleasant short walk will take you to the new Acropolis museum. Among the boundless treasures hidden inside, there are votives, artifacts of everyday life, and statues from the archaic period. Don't miss the Parthenon hall with the metopes, the pediments and the frieze.

In order to avoid the crowds, you will enter the Acropolis from the south slope and visit the Dionysus sanctuary and Dionysus Theatre built in the 5th century BC. Your guide will give you a detailed explanation of the glorious monuments of the Acropolis such as the Parthenon, the Erectheion, the Propylaia, the Nike Temple, and the surrounding monuments such as the Odeon of Herodes Atticus, the Observatory as well as the Philopappos.

After your guided tour in Acropolis, you'll pass by Mars and Pnyx Hill and enter the Ancient Agora to see the Attalos Gallery and finally the Temple of Hephaestus.

Pick-up from your hotel lobby in Athens.

What to remember
Read more
When
Read more
Provider
Key Tours Greece
Booking fee
Good news! No extra fees are applied to this booking.
Cancellation policy
Receive a 100% refund if you cancel up to 24 hours before the activity begins. 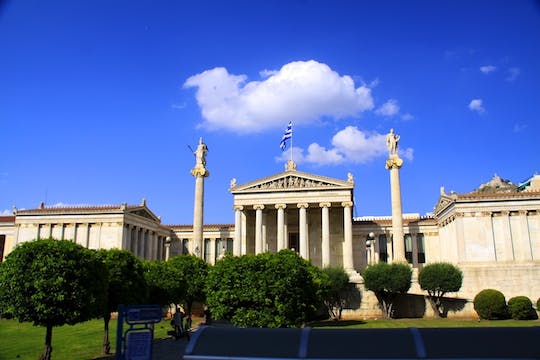 Printed ticket only
from:
$ 161
Sorry, it's sold out
Unfortunately all tickets have been sold out for this event