Join this "sitway" tour and discover the importance of the Tagus river and its riverside to Portugal. In this experience you'll visit the main areas in the city:

You'll start in Belém which is known as the historic district of the Age of Discovery. It was from its waterfront that Vasco da Gama and other explorers departed for their voyages, events celebrated today by grand monuments and museums in the neighborhood. The sensational architecture of the Tower of Belem and Jerónimos Monastery (both World Heritage Sites) is the result of the discovery of the sea route to India, the opening of trade with Japan, and the colonization of Brazil and parts of Africa and Asia. Belém are full of monuments and museums, such as the iconic MAAT. You'll pass under the 25th of April Bridge, one of the most remarkable landmarks of the city. You may think that bridge looks like The Golden Gate Bridge, in San Francisco... and you're right. You'll discover why! Getting a little closer to the center of the city, the Docas Area will be waiting for you. As it's known, it hosts the main nightlife centers of the capital.

You'll arrive then at Cais do Sodré, an important and bohemian area that connects everyone into the city and hosts our second station. Right next to Cais do Sodré is the city center of Lisbon where you will cross one of the most important points in this tour, the central square of Praça do Comércio, with its Cais das Colunas, an old shipping dock where people and goods entered Lisbon, at the Discoveries Era.

Keep going east and you can see one the most industrial areas of Lisbon, where you find a lot of new trendy quarters, where music and cultural life are developing.

Finally, you'll arrive at Parque das Nações, which hosts the last station which used to be an ugly industrial area until it was chosen as the site to host the last world fair of the 20th century, Expo 98. It has since been reborn into a futuristic glass-and-steel district, home to some wonderful examples of modern architecture and one of the most relaxed areas of Lisbon to go around.

Depends on the starting point selected:

Meeting point:
The meeting point depends on the starting point selected:Belém: - Sitgo Store in Belém, next to the Discoveries Monument and behind Espaço Espelho d'Água restaurant Cais do Sodré: - Next to the river and the Ribeira das Naus Quiosque café Parque das Nações: - Sitgo Station in Parque das Nações,near ''Estatua do Homem Sol''
What to remember
Read more
When
Read more
Provider
Sitgo
Booking fee
Good news! No extra fees are applied to this booking.
Cancellation policy
Receive a 100% refund if you cancel up to 24 hours before the experience begins. 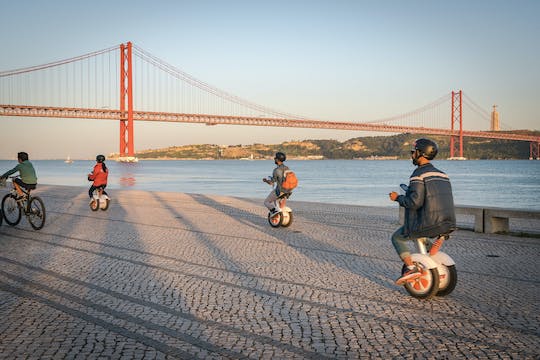 Mobile voucher accepted
from:
$28.00
Sorry, it's sold out
Unfortunately all tickets have been sold out for this event

See the sights of Lisbon on a minivan tour, and journey through centuries of history in historic neighborhoods such as Alfama and Castelo. Enjoy panoramic city views from the Castelo de S. Jorge and taste a typical custard tart from Belém.