Join the tour of the former World Trade Center in New York City as you commemorate the tragic events of 9/11. You’ll hear first-hand accounts from the guides, who are New Yorkers with personal connections to 9/11.

You’ll start the tour at St. Paul's Chapel, New York City’s oldest public building still in continuous use. Just one block away from the 9/11 attacks, it miraculously survived the falling building and debris. St. Paul’s Chapel served as a makeshift rescue center during the aftermath: Its iron fence became a bulletin board where family members posted notices of their missing loved ones. Today, with the mementos received from people around the world supporting New York City, the church serves as both a landmark and a tribute.

Next, listen to the heroic stories of the emergency responders at the Firefighter's 9/11 Memorial Wall and see the Engine and Ladder Company 10/10, the fire station at Ground Zero.

Finally, you'll enter the 9/11 Memorial, where you can pay your respects to those who lost their lives in the World Trade Center. Take a moment at Michael Arad’s “Reflecting Absence,” a man-made waterfall that symbolizes the void left behind by tragedy. Learn how the names of the nearly 3,000 victims were placed around the waterfall next to their friends, family members, and colleagues. See the new Freedom Tower and World Trade Center rise from the ground.

Meeting point:
Please meet your tour outside of St. Paul's Chapel, 209 Broadway. Arrive 15 minutes before. Look for the tour guide or representative, who will be wearing an orange lanyard or holding an orange flag. The tour ends at 9/11 Memorial, about 4 blocks from the meeting location.Please note: DO NOT meet at the 9/11 Memorial, 9/11 Museum or the One World Observatory.
What to remember
Read more
Provider
ExperienceFirst
Booking fee
Good news! No extra fees are applied to this booking.
Cancellation policy
Unfortunately, we can't offer you a refund nor can we change or cancel your booking for this particular product, due to our partner's policy. 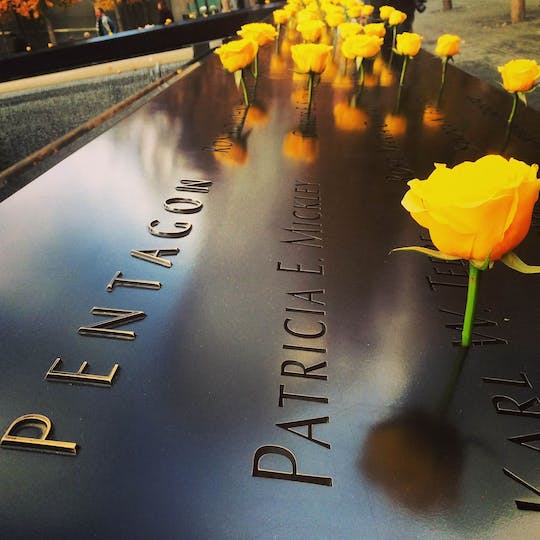 Buy your Empire State Building tickets with us and admire NYC from the 86th-floor Observatory. Buy express pass tickets for a more efficient entry!

Duration up to 2 hours
Instant Confirmation

Save 38% on six of New York's top attractions with the CityPASS, including the Empire State building, Statue of Liberty, 9/11 Museum and much more.