Explore one of the best museums in the US! You'll start with a blast from the past, with a visit to Ancient Egyptian tomb models. Incredibly well preserved, these pieces were a more important discovery than they seem, as they offered pictorial insight into what life in Ancient Egypt was like. You'll also get to see the Temple of Dendur, fully intact and surreally displayed inside a naturally lit atrium, nestled in Central Park.

You'll then head east for the Antioch Chalice, believed by some to be the Holy Grail itself, the cup from which Jesus drank on the night he was betrayed. Believe the story? You’ll have time to debate its merits with your expert guide. For history aficionados, the next few stops will be a true delight: the Greek and Roman wing contain elegant statues, imperial Roman busts, and intact frescos buried along with those at Pompeii.

But the exploring doesn't stop there! Head over to exotic Oceania to see boldly carved Bisj poles from Papua New Guinea, for which a Rockefeller gave his life. The tour continues to the Golden Age of Dutch painting, perusing portraits by Rembrandt and marveling at the virtuosity of Vermeer. After a brief passage through Italy, it’s off to Spain to see El Greco and to France for Jacques-Louis David’s famous Death of Socrates. Get ready for a unique and engaging Met experience!

Please meet in the main lobby to the right of the information desk in front of the large seated Pharaoh.

What to remember
Read more
When
Read more
Provider
Walks US
Booking fee
Good news! No extra fees are applied to this booking.
Cancellation policy
Receive a 100% refund if you cancel up to 48 hours before the experience begins. 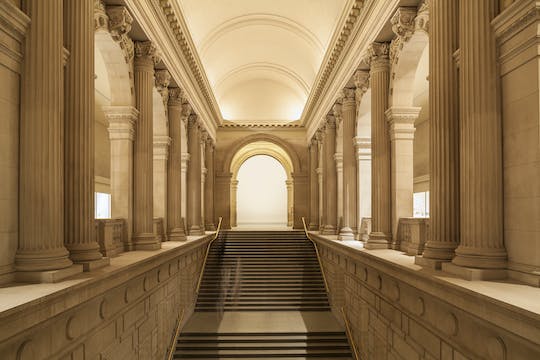 Mobile voucher accepted
from:
$64.26
Sorry, it's sold out
Unfortunately all tickets have been sold out for this event