Tickets to Wicked on Broadway

based on 12 reviews
Free cancellation

Winner of over 50 major awards including the Grammy Award and three Tony Awards®, Wicked is the untold story of the witches of Oz. Long before Dorothy drops in, two other girls meet in the land of Oz. One, born with emerald-green skin, is smart, fiery, and misunderstood. The other is beautiful, ambitious, and very popular. Wicked tells the story of their remarkable odyssey, how these two unlikely friends grow to become the Wicked Witch of the West and Glinda the Good.

Declared “The Best Musical of the Decade” by Entertainment Weekly and “A Cultural Phenomenon” by Variety, Wicked is based on the novel by Gregory Maguire, has music and lyrics by Stephen Schwartz, and a book by Winnie Holzman. The production is directed by Joe Mantello with musical staging by Wayne Cilento.

What to remember
Read more
When
Read more
Provider
Broadway Inbound
Booking fee
Good news! No extra fees are applied to this booking.
Cancellation policy
Receive a 100% refund if you cancel up to 8 days before the experience begins. 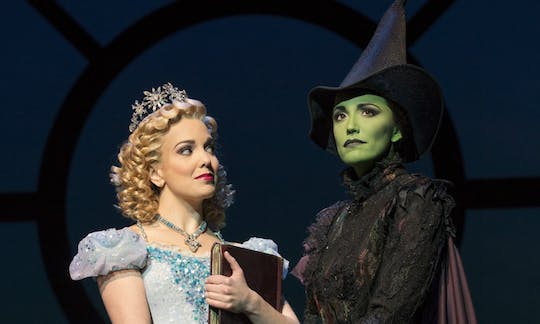 Tickets to Wicked on Broadway
(12)