Enjoy a private history tour in the center of Berlin about the final offensive in WWII. This guided walking tour aims to get an overview of the history of Berlin during World War II and life in the later Soviet Berlin.

Visit the grounds of the very last battles such as the Reichstag building, where the victory banner was raised and the location of the former Reich’s Chancellery, next to today’s Memorial to the Murdered Jews of Europe. You will see two impressive Soviet War Memorials, which are the final resting place for thousands of Soviet soldiers.

From Alexanderplatz, the former center of Socialist East Berlin, you will immerse yourself in the eastern districts of Berlin. Discover Karlshorst, where the capitulation was signed in the night from May 8 to May 9, 1945. The German-Russian Museum, with the surrender room, a permanent exhibition with a focus on the German-Soviet War from 1941-1945 and Soviet military equipment in the garden, is the ending point of the tour.

Meeting point:
Meet your Guide at the exit Washington Square (Washingtonplatz; south side), on the left-hand side, next to the electronic display board for public transport
What to remember
Read more
Provider
Berlins Taiga
Booking fee
Good news! No extra fees are applied to this booking.
Cancellation policy
Receive a 100% refund if you cancel up to 48 hours before the experience begins. 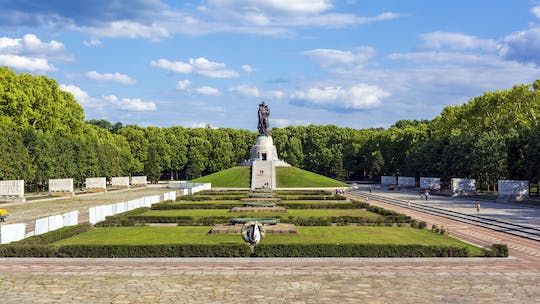